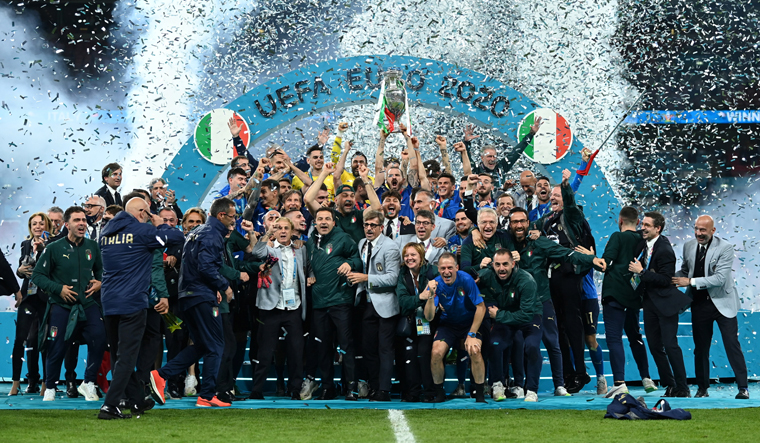 In a thrilling penalty shoot-out finale, Italy defeated England 1-1 (3-2) to win the Euro 2020, completing a resplendent comeback from since when they hit rock bottom while failing to qualify for the 2018 World Cup. The Roberto Mancini-led side are currently on a magnificent 33-game unbeaten streak.

For England, the wait continues with a 55-year trophy drought. This was their first competitive final since their win at the 1966 World Cup, albeit with clear signs of improvement and a gifted, young squad that can only do better in the upcoming World Cup.

The game started off at a blinding pace. England's Luke Shaw rifled in a beautifully controlled half-volley in the second minute of the game, becoming the player to score the fastest-ever goal in a Euros final. In the first half, England, who played with wing backs, were tight at the back and the middle, largely seeing off a toothless Italian attacking threat.

English fan spirits were up at half-time. This was the same team that conceded just one goal in its six games in the tournament. Surely, they could hold on for another 45 minutes.

The second half, however, was a different ball game altogether. Mancini switched tactics, and Italy started pressing higher up the pitch, penning England in and attacking in waves that suffocated the Three Lions. Italy got a deserving equaliser through defender Leonardo Bonucci at the 67th minute, and England looked smothered, lacking inspiration, and incapable of making themselves a nuisance in the final third.

The English woes were best highlighted by the game of their talismanic striker Hary Kane. He looked starved of delivery, and had close to zero touches in the opposition box.

The game went into penalty shoot-out. Of course it had to be the penalties. For England coach Gareth Southgate, it was penalty miss, against Germany at Euro '96 that denied England a chance of making the final, that defined his national team career. Penalties now denied them their first chance of silverware in more than half a century.

Southgate had brought on Marcus Rashford and Jadon Sancho in anticipation of penalties. The move backfired, as the duo lost their chances, along with 19-year-old Bukayo Saka. English keeper Jordan Pickford saved the Italians' second kick, but Rashford failed to capitalise and sent his shot wide of the goal. Subsequently Sancho's shot was saved, and eventhough Pickford kept English hopes alive by denying Jorginho, Saka missed the deciding spot kick.

"The players gave everything they could have, not only tonight but throughout the whole tournament," Southgate told a news conference. "They should hold their heads high. They are a team who have pulled together, given the country some incredible evenings. They have made history several times in the tournament. They played so well in a first half of a final when the expectation was so high. They have done more than any other team in the last 50 or so years. They should be proud of what they have done."