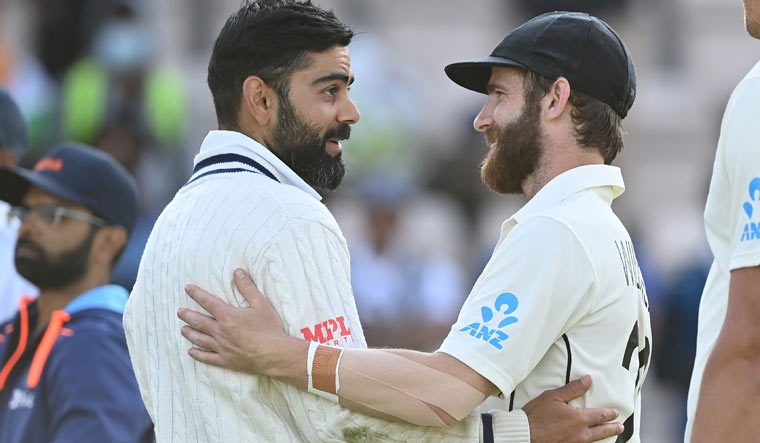 New Zealand skipper Kane Wiilliamson on Wednesday said winning the World Test Championship title is a "special achievement to be savoured" by his team which relies on "bits and pieces to be competitive".

New Zealand humbled India by eight wickets in the finale of the two-year-long event in Southampton on Wednesday and Williamson, in the post-match presentation, dodged a query on whether he considers it the biggest moment in the island nation's cricket history.

"I've been part of (New Zealand cricket) for a short while, it's a very special feeling, the first time in our history we've come away with a world title," he said.

"We've had 22 players over the last two years, and they've all played their part and the support staff and the guys who played this match, it's a special achievement to be savoured.

"We know we don't always have the stars, we rely on other bits and pieces to stay in the game and be competitive," he added.

A lot of that commitment was on display against the world number one Indian team with the Kiwis bowlers out-witting star-studded lineup before Williamson and Ross Taylor combined to take the team home in a chase of 139.

"It's not always easy in a final, a one-off Test match, we respect that, and throughout all six days, it ebbed and flowed, no one really got the upper hand, and it came to the last day...," he said.

"We saw a lot of heart from the lower order who came in and tried to inch us into some sort of lead. It was a very sporting surface, and having only four days' cricket, there was always a chance of a result," he added.

The Kiwis' retiring wicketkeeper B.J. Watling displayed a lot of grit by continuing to stay on the field despite injuring his finger.

Watling has already announced that WTC final is his swansong game but Williamson joked that he would probably change his mind now.

"I don't know if he's retiring anymore. He's a special member, a leader in our group, and really epitomises our team," he said.

"A scrappy performance, which is close to his heart, because he's a scrappy player. A great occasion to celebrate, a great game of cricket, and obviously a great career which we'll celebrate."