Rishabh Pant was the top-scorer for India, with 41 runs, but fell to a rash shot 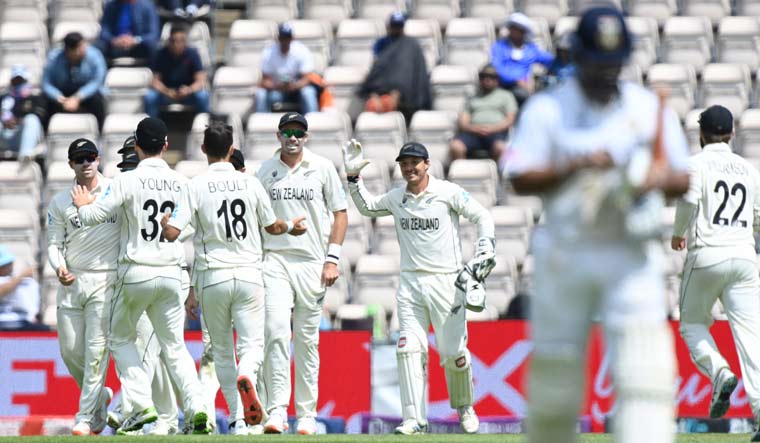 The World Test Championship final is poised for an interesting finish, with New Zealand bowling out India for 170 in their second innings on the sixth and final day in Southampton on Wednesday.

The Kiwis now need 139 runs to win the inaugural WTC title, in 53 overs. NZ pacers Tim Southee and Trent Boult did the damage, picking up four and three wickets respectively, but it was Kyle Jamieson who set the tone in the morning with wickets of skipper Virat Kohli (13) and Cheteshwar Pujara (15).

India resumed the day at 64 for two but none of the batsmen could play a long innings. Rishabh Pant was top-scorer for India with his 41-run knock but was guilty of playing one attacking shot too many. The dashing wicketkeeper-batsman, who was dropped on 5 by Southee off Jamieson, tried to go after the Kiwi bowlers but ended up top edging a slice off Boult.

India's approach as Mohammed Shami had pointed out, was going to be "safety first" and Kohli and Pujara decided to defend dourly but their nemesis Jamieson (2/21 in 17 overs) kept coming at them relentlessly.

The extra bounce outside the off-stump had Indian skipper feeling for it and B.J. Watling got the easiest of catches.

Pujara, whose abilities of grinding out bowlers has reached mythical proportions and once again he was never looking to score. The pressure was always there and Jamieson fired one in with the angle. Pujara wanted to remove his bat but it seemed the ball tailed him and Ross Taylor got a regulation catch.

At 72 for four with a lead of only 40, it was trouble for India but Ajinkya Rahane (15 off 40 balls) and Pant added 37 runs, largely due to the southpaw's attacking instincts.

Ravindra Jadeja hung around for 16 runs, and put on 33 runs with Pant but fell feeling at a Neil Wagner delivery. Ravichandran Ashwin, too, followed soon after Pant fell, trying to drive a wide full-length delivery off Boult.

Shami belted three fours but fell to Southee for 13, trying to go for the fourth boundary.