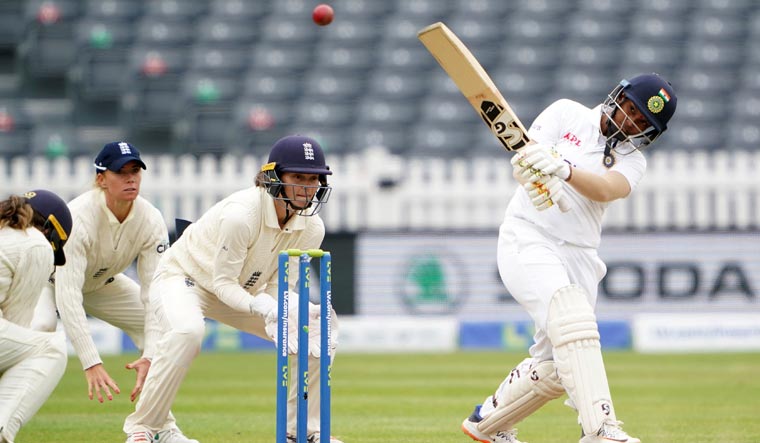 Deepti Sharma in action during day four of the Women's International Test match between England and India, at the Bristol County Ground | AP/PTI

The one-off women's Test between India and England ended in a draw on the final day in Bristol on Saturday, with the visitors defying the home side attack to score 344 for 8 in their second innings after following-on.

India were forced to follow-on on Friday after conceding a 165-run first innings lead to England. But the visitors recovered from a middle-order batting collapse in their second innings to defy the home side bowlers on a sluggish pitch on the fourth and final day.

Number 8 batter Sneh Rana top-scored in the second innings with 80 not out off 154 balls. Rana and number 10 Taniya Bhatia (44 not out) shared 144 runs for the unbroken ninth wicket as they frustrated England bowlers for 30.4 overs.

India took an overall lead of 179 runs with two second innings wickets in hand when the two sides decided to end the match.

Earlier, Indian women reached 243 for 8 at tea. Five wickets fell in the eventful second session with the captain Mithali Raj (4) and Harmanpreet Kaur (8) getting out cheaply. Set batter Punam Raut also fell for 39 off 104 deliveries.

Deepti Sharma and Punam Raut shared a 72-run stand for the third wicket in the second session as India wiped off the deficit after being forced to follow on by England on Friday.

India had played their last Test nearly seven years ago, beating South Africa by an innings and 34 runs in Mysore.