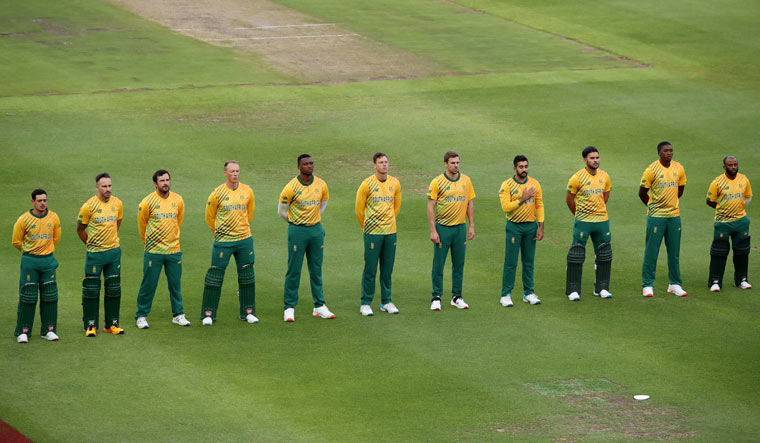 The ICC on Tuesday said it will not intervene in the governance crisis engulfing South African cricket till the country's board asks for it, after the three national team captains expressed concerns over possible suspension by the game's global governing body.

The three skippers Dean Elgar, Temba Bavuma and Dane van Niekerk have signed a joint statement expressing their concerns before the ICC statement came as a relief.

"The ICC encourages Members to work with governments to resolve issues. Not all government intervention is problematic and for the ICC to get involved it requires a formal complaint from our Members that it is unwanted," the apex body said in a statement.

"Should that happen, we will evaluate the situation based on the facts provided and plan an appropriate course of action."

An ICC source said that Cricket South Africa (CSA) hasn't yet reached a situation that demands the apex body's intervention.

"ICC doesn't want to press the panic button yet and want them to solve the issue themselves," the source said.

"We aren't saying that the government intervention in this case is problematic or not. It is a general view in terms of the process we follow.

"When the government grants funds etc. under certain conditions that is also termed as government intervention."

Earlier, the players feared if the current impasse is not resolved soon, South Africa may not be able to take part in the ICC T20 World Cup, to be held in India in October-November.

"The Proteas Men's team has an ICC World T20 event in November. The current state of cricket administration undermines our preparation in this regard. It may even lead to our suspension from this event should the ICC decide to suspend South Africa."

The impasse between the Members' Council (MC) of CSA and its Interim Board (IB), which was expected to be resolved at a Special General Meeting (SGM) on Saturday, ended with a secret ballot by the MC that refused to accept long-standing proposals for amendments to its Memorandum of Incorporation (MOI) to allow for a majority independent Board and an independent Chair.

Sports Minister Nathi Mthetwa has now indicated that he will step in to address the crisis, which has been going on for 18 months now, during which time almost all top executives and the Board at CSA either stepped down or were dismissed.

"Government intervention in the sport will have dire consequences, and the captains feel that this may lead to the ICC suspending South Africa.

"These outcomes will in turn impact touring, broadcast rights and sponsorship deals. Ultimately, the financial viability of the game will suffer and cricket at all levels will be severely prejudiced," the players said.

"The Members' Council has now acted contrary to the wishes of the Minister, the Nicholson Recommendations, King IV Governance principles, and international best practice how can this be in the best interests of our game?" the statement queried.

The crisis was exacerbated when, despite an initial ruling that other participants in the virtual meeting on Saturday, including the media, would have only observer status, the chairman allowed SASCOC Acting Chairman Barry Hendricks to address the meeting.

Hendricks advised the meeting against accepting the MOI because he said it first had to be sanctioned by SASCOC as the mother body for all sport in the country.

He also issued a veiled threat that without this, CSA risked losing its national colours and the participation of the Proteas women's squad, which has qualified for the Commonwealth Games, could be in jeopardy.