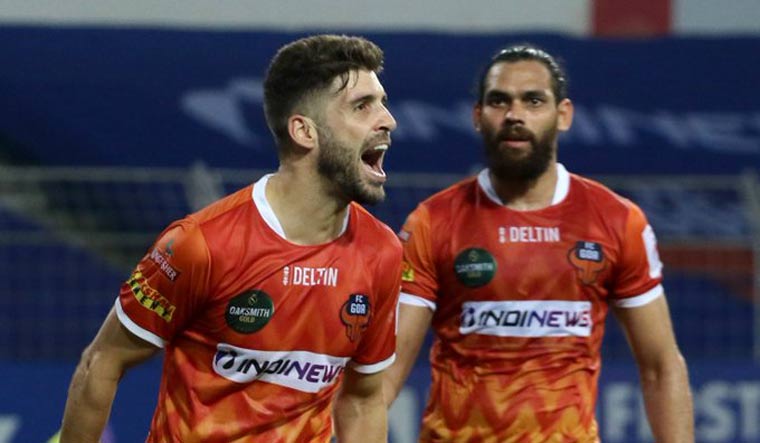 FC Goa played out a goalless draw against Hyderabad FC to become the fourth and last team to qualify for the semi-finals of Indian Super League at the Fatorda Stadium in Fatorda on Sunday.

Hyderabad FC went into the match needing a win to make the semi-finals, but FC Goa ensured that they kept a clean sheet to earn a crucial point that cemented a top-four league stage finish for the Gaurs.

Both the teams failed to break the deadlock in the first half.

Ivan Gonzalez made a crucial interception in stoppage time to deny Hyderabad FC a goal and seal the fourth spot for the Gaurs.

Neither side managed to create anything of note in the first half as the defenders were on top and looked solid while dealing with any sort of danger that came their way.

Manuel Marquez's men spent a lot of time in FC Goa's half without getting in behind the Gaurs' backline. They could have also capitalised from a few set-pieces, but FC Goa held firm and averted any danger that came into their box.

FC Goa came out for the second half looking more positive. Creating clear-cut chances though were still difficult to come by as both the sides struggled to produce their best in the opposition final-third.

Hyderabad FC upped the ante in search of a goal as the match entered its last 15 minutes of regulation time. They spent a lot of time camped near FC Goa's box but the Gaurs managed to get bodies behind the ball and defend resolutely.

Hyderabad FC had a huge chance of taking the lead in the 85th minute when a Joao Victor ball into the box was just beyond the reach of Joel Chianese and substitute Liston Colaco, both of whom were desperately trying to get on the end of the cross.

FC Goa went up the other end and saw substitute Devendra Murgaokar charged with the ball from the left into the box and cut onto his right foot before failing to hit the target with his shot.

James Donachie then headed an FC Goa corner marginally above the crossbar in the last minute of regulation time.

Hyderabad FC also had a golden opportunity to win the match in injury time when Gaurs custodian Dheeraj Singh could only parry substitute Roland Alberg's shot into a dangerous area in the six-yard box.

Colaco looked like he was about to put the rebound into an empty net, however, Ivan Gonzalez made a crucial interception to deny Hyderabad FC.

Adil Khan also had a nervy moment towards the end of the match as he almost headed the ball into his own net. However, Dheeraj rescued Adil by tipping the ball over the crossbar for corner as FC Goa held on for a draw.

FC Goa now will have to wait for the result of the game between ATK Mohun Bagan and Mumbai City FC to know their semi-final opponents.