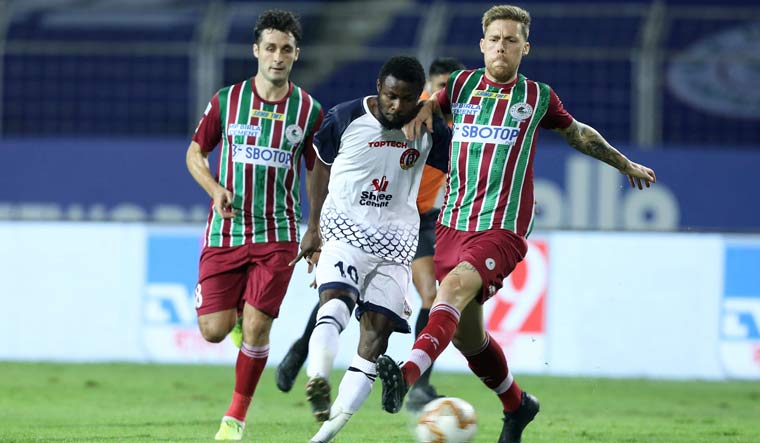 Carl Gerard McHugh of ATKMB, Bright Enobakhare of SC East Bengal and Jose Luis Espinosa Arroyo of ATKMB in action during the ISL 2020-21 match between at Fatorda Stadium in Goa | PTI

Roy Krishna once again spelled his magic on the high profile Kolkata derby by scoring one and assisting in another two as ATK Mohun Bagan walked away with a one-sided 3-1 win over SC East Bengal in the ISL, in Fatorda on Friday.

In the 100th year of Kolkata derby, Roy Krishna drew first blood in the 15th minute in a dominating start by the Mariners but a blip saw Tiri accidentally head into his own net (41st) from a Raju Gaikwad throw-in as both teams headed into the break 1-1.

But it was a powerhouse display by the Mariners in the second half with the Fijian star marksman all over the pitch.

Roy Krishna magically intercepted a short pass by SCEB captain Daniel Fox at close range before David Williams found the back of the net with a perfect finish (72nd).

There was more to the misery of SCEB as they conceded a third one in the 89th minute with Roy Krishna setting up with a clinical cross to Javi Hernandez from the right to secure their fifth win on the trot and second successive derby win of the season.

ATK Mohun Bagan, who downed Jamshedpur FC by a solitary goal in their previous outing, thus consolidated their position at the top further with 39 points from 18 matches.

It also meant that they went five points clear of second-placed Mumbai FC, brightening their chance to walk away with the League Winners' Shield and sealing the AFC Champions League slot.

Having seen their ultra defensive approach break in by Roy Krishna's incisive raids, the Red-and-Gold started looking dangerous with set-pieces but were completely outplayed by the Antonio Lopez Habas-coached side.

Roy Krishna's strong control and finishing skill was on offer early into the start when he sprinted towards goal, dribbled past the goalkeeper Subrata Paul and found the back of the net from the night for his sixth goal in as many matches.

After the cooling break, the Red and Gold Brigade suddenly looked dangerous with their set-pieces and it was Tiri who became the culprit to gift a goal to their rivals.

It seemed Tiri was blocked by their central defender Sandesh Jhingan as he could not view ball properly to get the deflection into his own net.

But it did not matter much as Roy Krishna toyed with SCEB's fragile defence and set up the two goals for Williams and Javi.