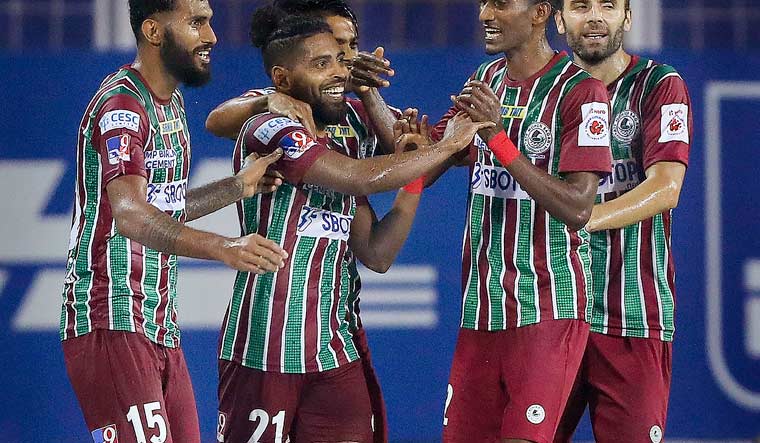 Roy Krishna of ATKMB celebrates his goal with players during the 7th season of the Hero Indian Super League between ATK Mohun Bagan and Jamshedpur FC held at the Fatorda Stadium, in Goa, Sunday | PTI

Fiji international striker Roy Krishna did it once again as he scored a late goal to help ATK Mohun Bagan beat Jamshedpur FC 1-0 and reclaim the top spot in the Indian Super League in Margao on Sunday.

After a cagey affair threatened to end in a goalless draw, Krishna's late strike (85th minute) was the difference as Antonio Habas' team grabbed all three points at the Fatorda Stadium.

The win propelled ATKMB, who have already qualified for the play-offs, to the top of the ISL table. Mumbai City FC, who ATKMB displaced at the top by two points, have a game in hand. The result also meant that Jamshedpur's chances of making it to the play-offs are all but over.

The first half was a cagey affair with both teams adopting a rather cautious approach.

ATKMB though soon took the upper hand. They had a penalty shout as early as the seventh minute when Krishna went down in the box, under pressure from Peter Hartley, after being fed by David Williams. However, the referee ruled otherwise.

There were a few chances in the opening half-hour with Marcelinho going closest in the 28th minute when he crashed a shot against the side netting.

Jhingan had an opportunity off a corner at the stroke of half time but he missed his chance to head the ball in.

The second half continued in the same vein though Jamshedpur coach Owen Coyle tried a more attacking approach with the introduction of Nerijus Valskis. However, with an hour gone, Jamshedpur was yet to register a shot on target—it was clear that their intention was to sit back and defend.

ATKMB kept on fashioning opportunities at the other end. Rehenesh was called twice into action in quick succession, both times to fend off Krishna. First, he forced a save from Rehenesh after being fed by Marcelinho. Then, a rather hopeful shot from the flanks by the Fijian was gathered easily by the Jamshedpur keeper.

But Krishna was not to be denied for long. His goal came right after ATKMB keeper Arindam Bhattacharja had acrobatically kept out a header from Valskis that looked to be going in.

And as was the case with a lot of times that Krishna had scored, it was David Williams who created it. After receiving the ball from the Australian, Krishna found the right-hand corner of the goal, past a diving Rehenesh, with a perfect finish.