SCEB won a penalty in the 19th second of the game, but failed to convert it 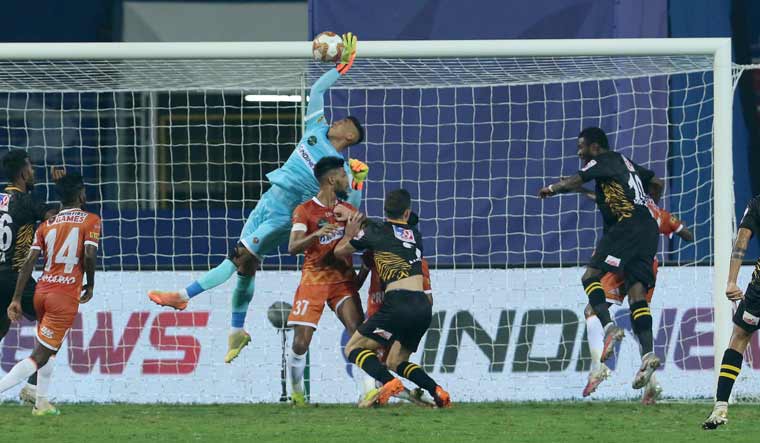 SC East Bengal (SCEB) failed to make use of a numerical advantage to settle for a 1-1 draw against FC Goa in their reverse leg Indian Super League clash at the Jawaharlal Nehru Stadium, in Goa on Friday.

Spanish centre forward Igor Angulo (39th minute) rounded off Debjit Majumder after being left unmarked to give the Gaurs a first-half lead.

But they failed to hold on to the lead and SCEB found the equaliser in the 65th minute when skipper Daniel Fox pulled his team back from a close range strike.

The opportunity came from a free kick that Bright Enobakhare won on the left flank before Anthony Pilkington delivered a good cross into the box.

FC Goa goalkeeper Dheeraj Singh failed to catch it and the loose ball was blasted into the back of the net by Fox.

A minute later, the Gaurs skipper Edu Bedia was sent off following a second booking following an ugly tackle on Pilkington from behind.

The red-and-gold pushed hard for a lead but some poor finishing coupled with Dheeraj's sharp goalkeeping ensured a 1-1 stalemate by the two teams for the second time this season.

FC Goa now have stretched their unbeaten streak to seven games, and remained at third place with 21 points from 14 matches.

SCEB are winless from four matches to remain on 10th spot with 13 points from 14 matches and the result dealt a big blow to their play-off aspirations.

It was drama early on as SCEB had the chance to take the lead after winning a penalty in the 19th second.

The Gaurs goalkeeper Dheeraj Singh dived the wrong way but Anthony Pilkington bottled the chance, shooting the ball far off the post.

It summed up the story for Robbie Fowler's team as his wards lacked the cutting edge up front and missed a slew of chances against the 10-man Gaurs.

Nigerian forward Bright Enobakhare, who had struck a stunner in their 1-1 draw in the first-leg, looked threatening up front for SCEB but they lacked the edge with the likes of Pilkington and Jeje Lalpekhlua squandering numerous chances.

FC Goa missed the presence of coach Juan Ferrando on the touchline after the Spaniard was suspended.

In his absence, assistant coach Clifford Miranda marshalled the side.