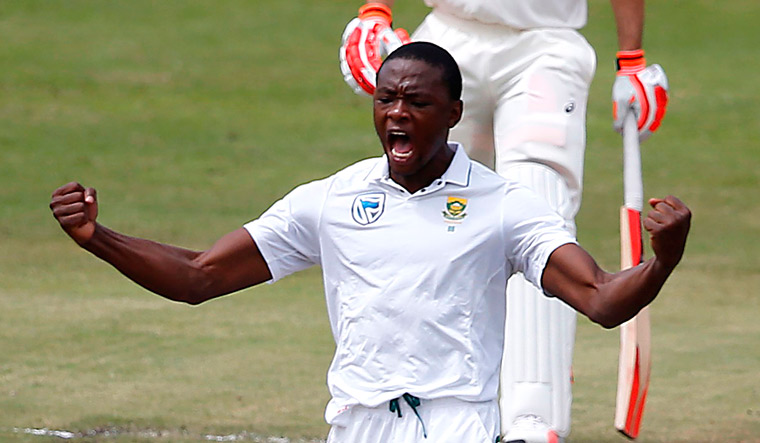 South African pace spearhead Kagiso Rabada added yet another feather to his illustrious cap on Thursday, when he became the third-fastest Proteas bowler to scalp 200 Test wickets. Overall, he is the eighth bowler from his country to achieve the milestone.

The 25-year-old breached Hasan Ali's defences on day three of the ongoing first Test against Pakistan at the National Stadium in Karachi to pick his 200th wicket. Dale Steyn is the fastest South African to reach the milestone, while pacer Allan Donald is the second.

Rabada, however, has the best strike rate – 40.8 – among international bowlers with a minimum of 200 Test wickets. Steyn is second on the list with 42.3, while Donald is fifth with 47.

He is also the fourth-youngest bowler ever to reach the 200-wicket milestone in the longest format of the game.

Meanwhile, despite Rabada's 3/70, Pakistan had their noses in front in the Karachi Test at stumps on day 3. South Africa suffered a mini collapse to end the day on 187/4, with a lead of just 29.

Pakistan resumed with a lead of 88 and added 70 runs to their overnight score, before South Africa bundled the hosts for 378. Rabada dismissed Ali in the 108th over, but a fifty-run partnership for the last wicket saw Pakistan cross the 350-run mark to take a lead of 158 runs.

In the second innings, South African openers Aiden Markram (74) and Dean Elgar (29) gave their team a solid start, with Rassie van der Dussen (64) too chipping in. But Yasir Shah (3/53) triggered the collapse to put Pakistan in the driver's seat going into the fourth day.

On Wednesday, Fawad Alam (109) rescued Pakistan after the hosts were left reeling at 27/4 in the first innings. Faheem Ashraf scored a valuable 64.