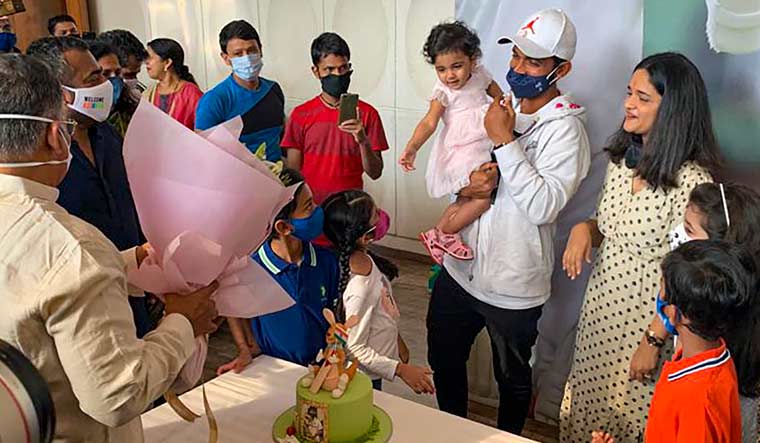 Ajinkya Rahane, who led India to a 2-1 win in the recent Test series against Australia, being welcomed by his family and supporters on his arrival at his residence in Mumbai | PTI

Ajinkya Rahane is the toast of the nation now, having led an injury-riddled Indian team to a historic 2-1 win in the Test series in Australia.

Stepping in after the humiliating loss in the first Test in Adelaide after skipper Virat Kohli went on paternity leave, Rahane led by example with a classic century in the second Test at Melbourne, guiding India to a series-levelling victory. The team then showed great character to draw the third Test in Sydney, and went on to win a thriller in the final Test in Brisbane, thus clinching the series.

The soft-spoken Rahane landed in Mumbai to a red carpet welcome, complete with chants of 'aala re aala Ajinkya aala'. The chants (meaning here comes our Ajinkya) were heard amid the beating of the traditional dhol tasha and showering of flower petals at Rahane's residential complex.

More surprises awaited him after he drove straight to his housing society in suburban Matunga, where residents had made elaborate preparations to accord their hero a royal welcome.

Rahane was welcomed with the beats of dhol, while others showered the cricketer with flower petals. Rahane was also joined by his wife and two-year-old daughter in the celebration.

Having set an example on the field with his humility and conduct, Rahane, today, once again showed why he is rated so highly as a cricketer and a human being. His neighbours had arranged for a cake for him with an edible Kangaroo figure on top of it, in an apparent reference to the Aussies. Kangaroos are the national animal of Australia and their cricket team is often referred to as the Kangaroos.

However, Rahane politely refused to cut the cake. Netizens hailed his decision to respect Australia's national animal, and also the vanquished opponents.

Soaking in the carnival-like atmosphere, Rahane acknowledged the love and adulation showered on him by the people of the city, many of whom waited for his team at the airport wearing masks amid the COVID-19 pandemic.

In his society, residents and videographers jostled to capture the moments and the unassuming batsman posed happily for them.