The Blasters were trailing 0-1 in the first half 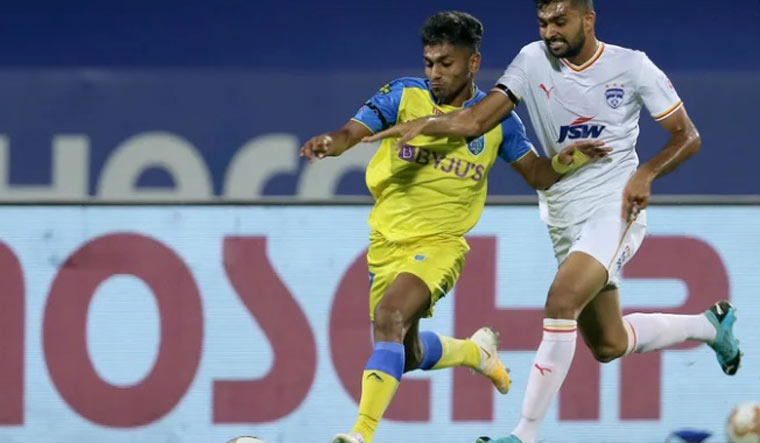 Kerala Blasters scripted a sensational comeback to edge Bengaluru FC 2-1 after being a goal down, in the Indian Super League 2020-21 match at the GMC Stadium in Bambolim, Goa.

Cleiton Silva put Bengaluru FC ahead in the 24th minute, but after the break, the Blasters managed to equalise in the 73rd minute. Lalthathanga Khawlhring, popularly called Puitea, put the ball in the back of the net in a goal-mouth melee. With the match in injury time, K.P. Rahul made a brilliant run down the right and placed a fierce shot past Bengaluru FC goalkeeper Gurpreet Singh Sandhu to complete the turnaround.

Despite starting the game better, Kibu Vicuna's men lacked the final ball and was promptly punished by Bengaluru, who scored against the run of play.

Kerala had their first clear-cut chance in the 18th minute when Jordan Murray's shot from inside the box went over the bar. Minutes later, Sahal Abdul Samad's threatening run into the box came to nothing.

Bengaluru promptly punished them for not making the most of their opportunities. Rahul Bheke's long throw from the right was not properly dealt with by the Kerala defence and it fell to Silva, whose acrobatic volley gave Kerala keeper Albino Gomes no chance.

Bengaluru had a chance to double the lead at the stroke of half time when Costa Nhamoinesu fouled Sunil Chhetri just outside the box. The resulting free-kick was taken by Chhetri and looked to be going in, but Albino pulled off a terrific save.

In the second half, Kerala Blasters got a chance when Juanan brought down Lalthathanga just outside the box. Lalthathanga took the free-kick himself but only succeeded in smashing it straight into the wall.

However, he made amends for it, albeit in contentious circumstances. Bengaluru keeper Gurpreet Singh Sandhu went down after using his body to block a powerful Gary Hooper shot from close range.

With Gurpreet still on the ground, Sandeep Singh fired the ball back into the box. After a melee, the ball finally broke free for Lalthathanga, who netted the equaliser.

Thereafter both teams pressed hard for the winner, getting free-kicks from threatening positions but eventually came to nothing.

Bengaluru came close to scoring, with substitute Leon Augustin finding himself clean through on goal in injury time. However, he failed to get the ball past the onrushing Gomes.

There was still time for a late winner, though. After Bengaluru struck the post, a rapid counter-attack from Kerala saw Rahul sprint into the Bengaluru half. Instead of trying to find a teammate, he took the shot himself and succeeded in beating Gurpreet for a dramatic winner.