'LHS (not =) RHS': Ashwin takes a dig at Aussie veterans, Vaughan for writing off India 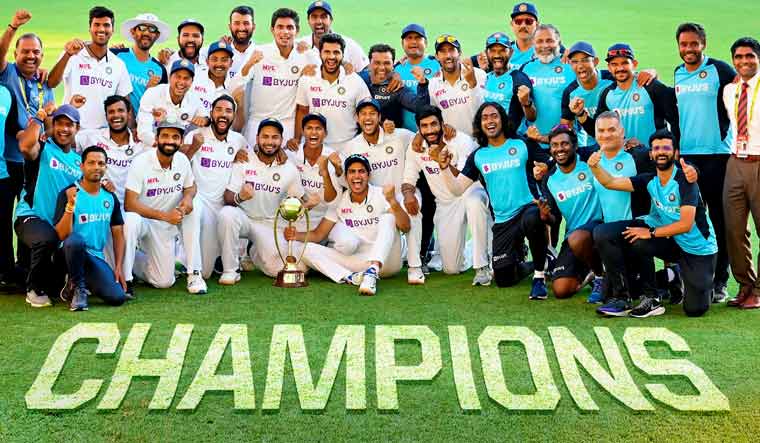 India pulled off one of the greatest chases in Test cricket history today to beat Australia by three wickets to win the fourth Test in Brisbane, and clinch the series 2-1. They did it with just 18 balls to spare in the final session of the final day. That Aussies had been unbeaten at the venue for 32 years.

But what made the win unbelievable was that India were effectively fielding an 'A' side as most of their senior players were out injured. Also, the series win came after the humiliating eight-wicket loss in the first Test at Adelaide, where the Indians were bowled out for 36—their lowest Test score—in the second innings.

With captain Virat Kohli going on paternity leave after the Adelaide Test, several former cricketers, especially Australians, and pundits wrote off India and even predicted a 4-0 thrashing.

But Team India had other ideas. Under stand-in skipper Ajinkya Rahane, they won the second Test in Melbourne, and fought out of their skin to draw the third in Sydney.

The Sydney Test saw injured duo Ravichandran Ashwin and Hanuma Vihari exhibiting resilience, character and skill of the highest degree on the final day to keep the Aussies at bay and the series alive.

But, as evident from Australia skipper Tim Paine's words, the hosts fancied their chances at the Gabba, a venue where they had not been beaten for 32 years. So, when India managed to breach that fortress in style, Ashwin took to Twitter to hit back at the detractors who predicted a series loss for India after the debacle at Adelaide.

Humbled by all the love and support we have received over the last 4 weeks!🙏 pic.twitter.com/nmjC3znglx

He took a dig at Michael Clarke, Ricky Ponting, Mark Waugh and Brad Haddin, and former England captain Michael Vaughan. The latter had, in fact, had taken back his words in a tweet after India's win today.

Wow .. That has to go down as one of the greatest if not the greatest Test victory of all time !! Egg on my face over here in the UK .. but I love to see character & skill .. India have it in abundance .. btw @RealShubmanGill & @RishabhPant17 are future superstars ! #AUSvIND