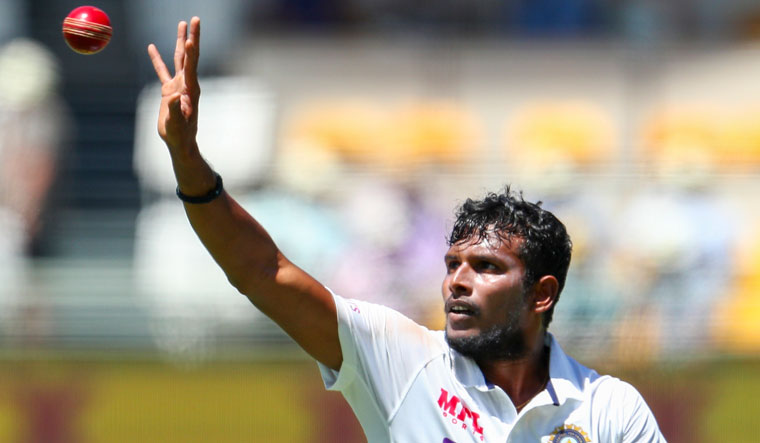 Thangarasu Natarajan reaches to catch the ball during play on the first day of the fourth Test between India and Australia at the Gabba, Brisbane | AP/PTI

Pacer Thangarasu Natarajan, who came to Australia as a net bowler, on Friday became the first Indian cricketer to make his international debut across all three formats during the same tour.

The 29-year-old Tamil Nadu player was one of the rookies named in the playing XI of the injury-ravaged Indian team against Australia in the fourth and final Test which started here on Friday.

He made his international debut in the third ODI against Australia on December 2 in Canberra, which India won by 13 runs.

Natarajan made an immediate impact by taking two wickets for 70 runs from his 10 overs.

Natarajan then played his part in India's 2-1 series win in the subsequent three-match T20 International rubber by taking six wickets during the series.

"Welcome to Test cricket ... Thangarasu Natarajan becomes the first Indian player to make his International debut across all three formats during the same tour," the ICC tweeted.

The Tamil Nadu player, whose mother worked as a daily wager, picked up two wickets in the 20 overs he bowled on the day, conceding 63 runs.

"The stuff dreams are made of. A perfect treble for @Natarajan_91 as he is presented with #TeamIndia's Test No. 300. It can't get any better! Natu is now an all-format player," tweeted the BCCI.