Saini left the field after bowling only 7.5 overs due to groin injury in Brisbane 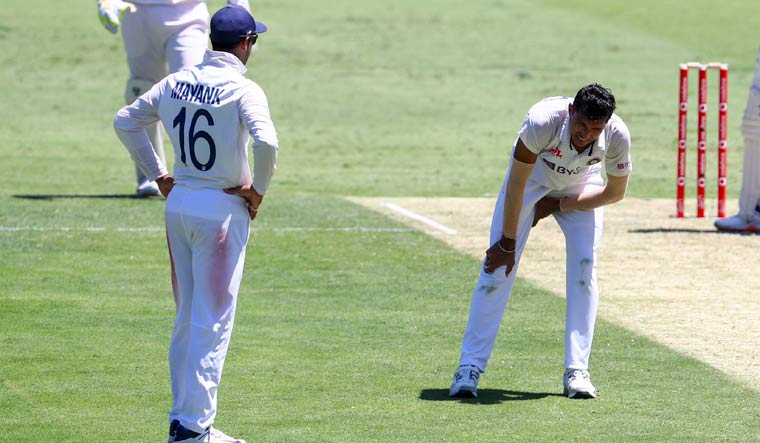 Navdeep Saini (right) reacts after sustaining a groin injury while bowling during play on the first day of the fourth Test between India and Australia at the Gabba, Brisbane | AP

Navdeep Saini's breakdown after bowling only 7.5 overs due to a groin injury on the first day of the fourth Test has raised some serious questions about the work done by national team's trainers and physios.

As the Australian tour hits its business end, the Indian team's list of injuries will make it very difficult for new national selection committee to pick a decent bowling attack for the England Test series.

While injuries can be can be segregated into two categories—trauma and fitness related—it is the latter that will warrant a few tough questions being put forth to the two physios and the couple of strength and conditioning experts who are with the team Down Under.

Australia's four bowlers—Josh Hazlewood (98), Pat Cummins (111.1), Mitchell Starc (98) and Nathan Lyon (128)—have bowled a total of 435.1 overs in three games and again will be seen in action in the ongoing Brisbane Test.

Cut to India and they have used six specialist bowlers over three Tests—Ravichandran Ashwin (134.1), Jasprit Bumrah (117.4 overs), Ravindra Jadeja (37.3 overs), Umesh Yadav (39.4 overs), Navdeep Saini (29 overs) and Mohammed Siraj (86 overs) with a total of 442 overs. And already due to fitness and on-field injury, five of them are out.

If pure fitness and injury management section is concerned, Umesh Yadav broke down having bowled in less than four completed innings in two Test matches while Saini has walked off having bowled only 36.5 overs in one game and one session to be precise.

Ashwin, India's best bowler on this tour, has bowled most number of overs 134.1 among the two teams in first three Tests but to be fair to him, in recent times he either been dropped or couldn't complete a series due to fitness concerns. This time, it's the back spasms with which he batted on the final day that ruled him out of the fourth Test.

Senior physio Nitin Patel and his understudy Yogesh Parmar along with strength and conditioning coach Nick Webb and Sohum Desai might have to field some tough questions as to why there's been so many breakdowns.

Add to it, Hanuma Vihari has now torn his hamstring, which is a pure fitness related inury and it's not that the Andhra lad batted long hours save the epic match-saving 161-ball-23 on the fifth day in Sydney, where he could barely stand.

"No one is questioning Shami, Bumrah or Jadeja's injury as they are trauma related.

"But why would a Umesh Yadav, who barely played any IPL matches or Navdeep Saini, who didn't bowl on this tour much after first two ODIs (save day/night warm-up game), broke down without even bowling 40 overs," a senior physio, who has worked with a lot of top Indian players in the past, questioned.

"People are raving about Vihari but one can't say he was overworked as he didn't play IPL. He didn't bat for long hours in Australian conditions. Did he train well, managed his body properly, was at peak fitness," questions are being asked.

In fact, in BCCI corridors, people are expecting that president Sourav Ganguly, himself a decorated former India captain, would pose some tough questions for the quartet (Patel, Parmar, Webb and Desai) about the breakdowns.

"It's high time that Ganguly and secretary Jay Shah ask a few questions because this is happening too often. The Indian team would enter the next bio-bubble in Chennai from January 27 for the England series with tests (RT-PCR) being conducted," a senior BCCI source said.

"So, technically, there are only 12 days left and probably Chetan Sharma and Sunil Joshi (national selectors) are clueless which are the fast bowlers who will be available for the Test matches. As of now, only fit senior Test bowler is Ishant Sharma as Bhuvneshwar Kumar has hardly played red ball cricket for a long time," he added.

Injured Hanuma Vihari on Friday left for India after being ruled out of the ongoing fourth Test in Brisbane.

Vihari has sustained a grade 2 injury during the final day of his match-saving 23 and will now require rest, followed by intense rehabilitation which rules him out of England series.

If Ranji Trophy is held in February, Vihari is expected to make a comeback and would surely be in the England-bound squad during the middle of the year.