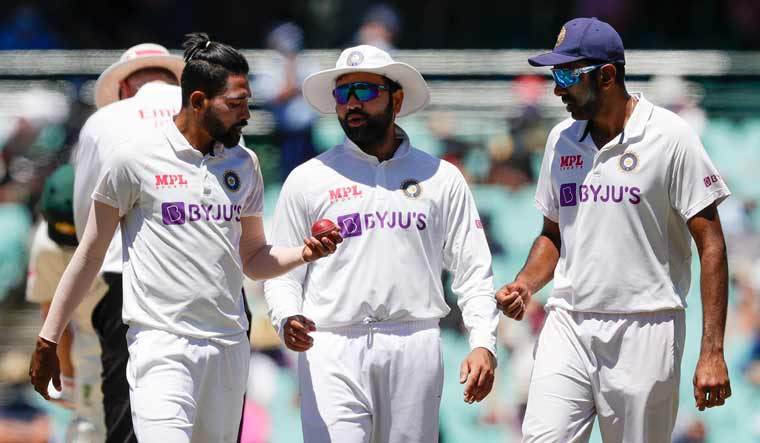 A new-look Indian bowling line-up kept it steady, removing openers David Warner and Marcus Harris before Australia reached 65 for 2 at lunch on the opening day of the fourth and final Test here on Friday.

With a cumulative experience of three Test matches and '10 balls' that Shardul Thakur bowled on his debut in 2018, India did well, although Steve Smith (30 batting, 55 balls) and Marnus Labuschagne (19 batting, 82 balls) were once again looking ominous on a bouncy and batting track.

That Australia forced a half-fit Warner (1) to play was evident when he had no apparent footwork while trying to drive an angular delivery from Siraj which was brilliantly snapped by an agile Rohit Sharma diving to his right.

It could be seen that Warner, after his groin injury, is still finding it difficult to stretch his front-foot and get to the pitch of the delivery.

Thakur, whose debut against West Indies ended in a nightmare after bowling only 10 deliveries, achieved success, bowling the 11th one in Test arena.

It was a gentle outswing, an inswing for left-handed Harris (5), who instinctively clipped it straight to debutant Washington Sundar at square leg.

However, Smith and Labuschagne, two of Australia's best batsmen, then took control of the proceedings with a 48-run partnership.

Smith, for one, was ready to punish the loose deliveries as he hit as many as five boundaries while Labuschagne did a 'Cheteshwar Pujara', holding one end up.

For India, Thangarasu Natarajan's (6-1-8-0) fairytale story just got better as he became India's 300th Test cricketer and looked reasonably decent with the new ball without being exceptional as he is with the white ball.

He did get some initial swing and kept the openers quiet during that first spell. But, the most impactful bowler was Siraj with his pace and length even though a few loose deliveries were there for the taking.

Thakur, to be fair, also bowled well within himself.