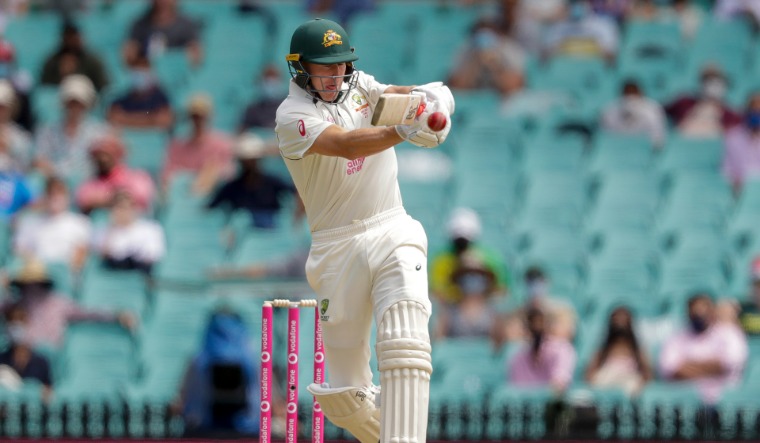 Australia lost both openers in the final session but were in control on 103 for two with a lead of 197 runs at the close of play on the third day of the third test against India on Saturday. Pat Cummins had taken 4-29 as Australia rolled through the Indian batting order on a sunny afternoon at Sydney Cricket Ground to dismiss the tourists for 244, the last six wickets tumbling for the addition of just 49 runs.

The most significant intervention from the pace attack, however, might be the deliveries from Cummins and Mitchell Starc that resulted in Rishabh Pant and Ravindra Jadeja leaving the ground for scans on their left elbow and thumb respectively. Wriddhiman Saha replaced Pant behind the stumps and was soon in action to help India remove Australia's new opening partnership inside 10 overs at a cost of 35 runs. The reserve snaffled up an easy catch off a pearl of a delivery from Mohammed Siraj that debutant Will Pucovski could only edge behind for 10. David Warner followed for 13 soon afterwards, trapped in front by Ravichandran Ashwin while attempting a sweep slog to leave Australia's hopes of a good score again in the hands of first-innings centurion Smith and Labuschagne.

The pair had put on 68 for the stand by the close of play with Smith on 29 not out and Labuschagne, who scored 91 in the first innings, unbeaten on 47. It was the breaking of a partnership between Cheteshwar Pujara and Pant that triggered the collapse that ended India's hopes of batting deep into the day and getting close to Australia's first-innings tally of 338. They resumed on 96-2 but Ajinkya Rahane and Hanuma Vihari departed relatively cheaply in the opening session to leave Pujara and Pant chipping away at Australia's lead in the face of some fine bowling. Josh Hazlewood forced the breakthrough when he had the injured Pant caught in the slips for 36, and in the next over Cummins finally winkled out Pujara after the batsman had scored a half century from 176 balls.

Notwithstanding some fine fielding, Indian fans will be aggrieved that three of their batsmen were run out on a day when they needed to occupy the crease for as long as possible. All-rounder Jadeja scored 28 not out despite his injury, as the tail-end wickets tumbled around him. India will be desperately hoping he has not made his final contribution to the match. The hard-fought series is tied 1-1 after the first two tests with the final clash scheduled to start at the Gabba next week. Cricket Australia are pressing ahead with those plans despite reports of concerns in the India camp over the level of isolation they will endure in Brisbane, which went into three days of lockdown on Friday after a COVID-19 case was found in the city.