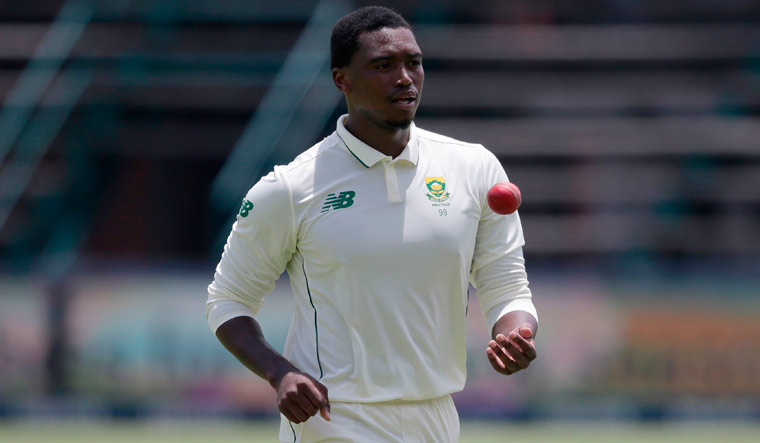 South Africa beat Sri Lanka by 10 wickets inside three days in the second and final Test on Tuesday to clinch the series 2-0 and gain some revenge for a surprise loss to the Sri Lankans the last time they toured.

South Africa's quicks bowled Sri Lanka out for 211 in its second innings at the start of the day at a typically pace-friendly Wanderers, leaving the Proteas batsmen with a simple target of 67 to win.

South Africa got there without losing a wicket and in just 13.2 overs as the home team cruised to victory. Aiden Markram was 36 not out and Dean Elgar 31 not out.

Sri Lanka tested South Africa in stages but its hopes ultimately faded when captain Dimuth Karunaratne was out at the start of the day and soon after making a century.

Karunaratne led the resistance with his 103 but he went less than five overs into the day's play, and with his exit Sri Lanka lost its last six wickets for 35 runs.

Pace bowler Lungi Ngidi finished with 4/44 for South Africa and was denied the chance of a five-wicket haul when pace partner Lutho Sipamla knocked out Asitha Fernando's off stump to end the innings and collect three wickets.

South Africa gave opportunities to young seamers Sipamla and Wiaan Mulder in the tests alongside Ngidi and Anrich Nortje in a bid to build depth ahead of upcoming series in Pakistan and at home to Australia.

"Our young lineup, they will get more experience, but good to see them come out hungry."

Sri Lanka started the day 150/4, with Karunaratne on 91, and had hopes of setting South Africa a reasonably challenging target on a difficult Johannesburg pitch for batsmen.

The tourists weren't able to do that as Karunaratne fell early trying a pull shot off fast bowler Nortje. He succeeded only in looping a catch to Mulder. His overnight partner Niroshan Dickwella was out four balls later and Sri Lanka's resistance ended.

"Individually, a couple of things we need to highlight, but as a group we have some positives to take out of the series."

The Sri Lankans showed grit in a losing effort after an horrendous run of injuries hampered them on the tour.

They were missing two of their most experienced players before the series and had five players injured during the first Test, contributing to their innings defeat.

Four of those players were ruled out of the second Test. That left the bowling attack especially depleted and Vishwa Fernando, who took five in the first innings, was the attack's most experienced member with just nine Test appearances coming into the game.

South Africa's run chase at the end was relatively untroubled.

Markram was given out in the over before lunch to a catch in the slips by Kusal Mendis but that decision was overturned when video replays showed the ball touched the ground as Mendis took it low down.

Markram and Elgar saw it through soon after lunch and South Africa completed a first test series win in two years and since beating Pakistan in early 2019.

A month later, they were shocked to lose 2-0 at home to Sri Lanka, which became the first Asian team to win a test series in South Africa.

Sri Lanka heads home to host England, and South Africa prepares for its first tour of Pakistan in 14 years.

"Never been there before, totally foreign," said Elgar, who was man of the series for his 95 in the first Test and 127 in the first innings at the Wanderers.

"Looking forward to it."