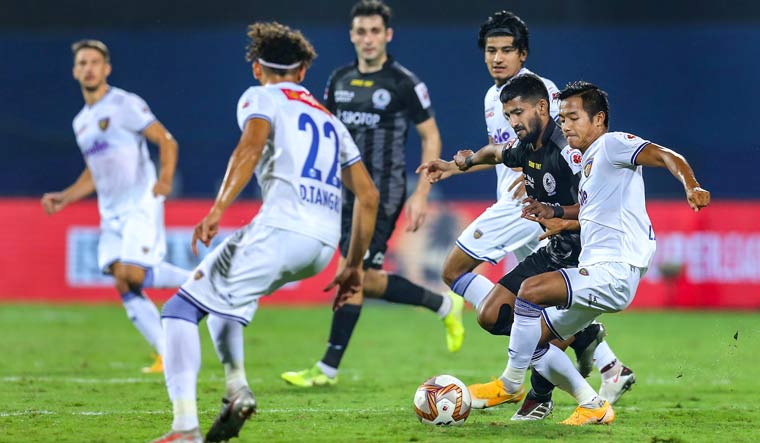 Jayesh Rane of ATKMB and Lallianzuala Chhangte of Chennaiyin FC in action during Indian Super League 2020-21 match at the GMC Stadium, Bambolim, in Goa | PTI

Chennaiyin FC failed to breach a resolute ATK Mohun Bagan defence, strongly guarded by goalkeeper Arindam Bhattacharya, to settle for a goalless draw in an Indian Super League match at the GMC Stadium in Bambolim on Tuesday.

In an end-to-end action, there were chances aplenty by both the teams, but the deadlock prevailed and it was the Mariners goalkeeper, who stood out between the posts and ensured a sixth clean sheet from eight matches to be adjudged the Hero-of-the-Match.

The point from the draw meant that the Kolkata heavyweights (17 points, eight matches) surged past Mumbai City (16 from seven matches) to the top of the table with a one-point lead.

It was a second successive draw by the Csaba Laszlo-led side as they once again squandered plenty of chances to settle in the seventh place with 10 points from eight matches.

The moment of the evening came in the 79th minute when Bhattacharya put a powerful shot away from Reagan Singh from the right with a perfect dive to his right.

Singh received the ball on the right flank and made a solo run towards the box to shoot the ball on target, which looked like a match-winning goal, but Bhattacharya managed to get his finger tips to parry the ball away.

"It was a difficult game, very good to return with a point. I'm happy with my clean sheet again," Bhattacharya said at the post-match presentation after securing his 25th clean sheet in ISL.

In the 83rd minute, Roy Krishna found himself in front of an open net but he could not get the angle in a lacklustre outing for the Fijian marksman.

Chennaiyin FC had another setback in store as their captain Rafael Crivellaro sustained a knee injury in the 66th minute and had to be substituted.

The Marina Machans had the first opportunity in the fifth minute when Rafael Crivellaro and Jakub Sylvestr exchanged a quick one-two inside the box.

The CFC skipper hit it with his wrong foot but could not get past Bhattacharya.

Minutes later, a surging Lallianzuala Chhangte received the ball from Crivellaro on the left before penetrating ATKMB box but his shot from the far corner went wide.

There was end-to-end action as ATKMB also tried their best for the lead with Roy Krishna and David Williams in the thick of action but the finishing boot was missing.

There was a controversial moment in the 29th minute when David Williams was pulled down inside the box with a faint touch from Reagan Singh but referee A. Rowan seemed uninterested.