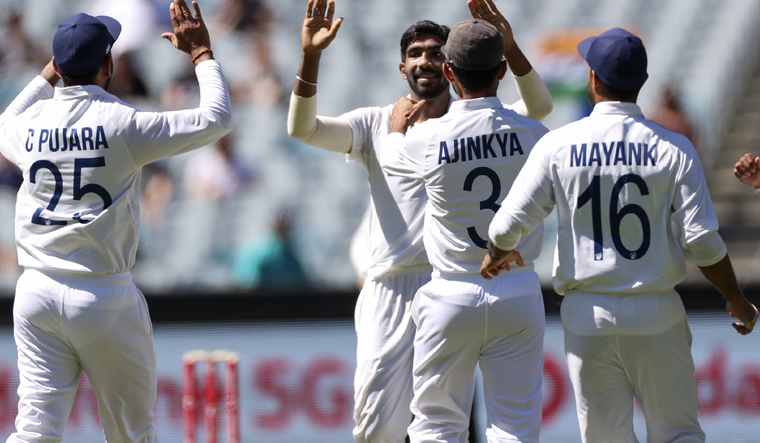 Indian bowlers were on the money as they ran riot through the Australian batting order on Day of the Boxing Day Test at Melbourne. India bowled out Australia for 195 before stumps. Paceman Jasprit Bumrah finished with 4-56, with spinner Ravichandran Ashwin taking 3-35 . Wade, Labuschagne and Head offered some resistance for the hosts but perished to some fine bowling from the Indians. Australia lead the series 1-0 after beating India by eight wickets in the first test in Adelaide.

Bumrah opened the accounts for India dismissing Joe Burns for a duck in the first session. Mathew Wade was starting to accelerate through his innings, hitting three boundaries, before Ashwin dismissed him. The dangerous Smith was once again dismissed by Ashwin of a similar delivery to the one that got him in the Adelaide test. India paceman Mohammed Siraj dismissed danger man Marnus Labuschagne to secure his maiden wicket on debut as the tourists maintained the pressure on Australia on day one of the second test on Saturday. Siraj struck Labuschagne on the helmet half an hour into his first spell, then returned to dismiss the number three batsman for 48 shortly before tea. Jasprit Bumrah took his second wicket of the match earlier in the session, removing Travis Head for 38 to break an 86-run partnership with Labuschagne after Australia resumed on 65 for three. Having dominated the morning, with spinner Ravichandran Ashwin taking two wickets and removing Steve Smith for a duck, India took their foot off the home side's throat in a meandering hour before Bumrah's intervention just after drinks.

After Ashwin removed Australian captain Tim Paine, the hosts were 164/8 and didn't look like they would cross 170. But some resistance from the tailenders and some aggressive batting from Lyon helped Australia post 195 on the board. Bumrah and Ashwin finished off the things in the end. Jadeja picked up the final wicket of Cummins.