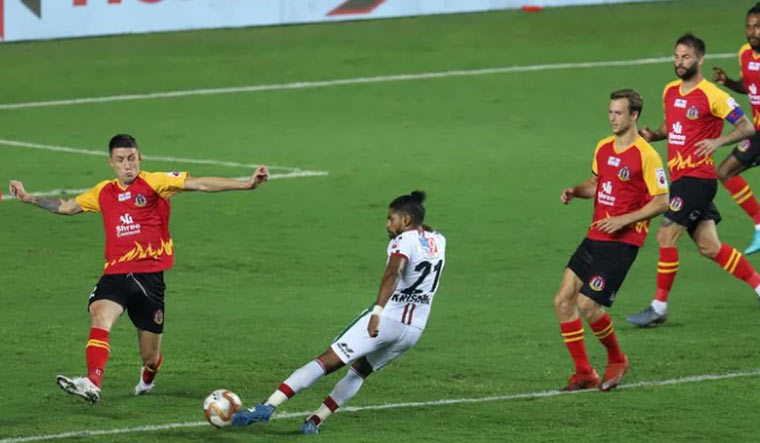 Krishna, who had scored ATKMB's lone goal against Kerala Blasters in their campaign opener, struck in the 49th minute before Manvir Singh killed the contest in the 85th minute with a solo effort.

With two wins on the trot, ATK Mohun Bagan led the table with six points, followed by Northeast United FC.

It was a typical Antonio Lopez Habas's style of play that panned out on the field as ATKMB were slow to get off the blocks before taking control of the game. Their defence, helmed by Tiri, put up a disciplined show to return with a clean slate for their second successive match.

For Liverpool legend Robbie Fowler, who built the SC East Bengal in less than a month's time, it was a disappointing start to his coaching stint in India as he was let down badly by his striker up front.

As the sole striker, Balwant Singh was wayward and missed a sitter at the hour mark when he blasted over the bar just in front of the net. SCEB had the better ball possession but looked thin up front, leaving too much to do for their vice-captain and former Norwich City winger Anthony Pilkington.

With plenty to prove as a coach in the ISL, Fowler went in for a defensive 4-3-2-1 formation with Narayan Das, Scott Neville, Daniel Fox and Rana Gharami in the backline.

Habas, the most successful ISL coach, was predictable in his approach, bringing back David Williams alongside Krishna, while Pritam Kotal, Tiri and Sandesh Jhingan guarded the goalmouth.

As in their last match against Kerala Blasters, ATKMB struggled to get going initially, while SCEB made some fine attacking moves but lacked the finishing touches.

The first opportunity came in the seventh minute when Anthony Pilkington brilliantly broke through the defences from the left but only to trip on his way inside the box.

Balwant had another brilliant chance in the 38th minute from a Surchandra Singh cross but the striker hit it past the far post.

ATKMB had their first real chance just a minute before with Javier Hernandez on the target but Debjit Majumder came on his way as the first half saw a stalemate.

Like in the last match when he struck the winner after the changeover, Krishna broke the deadlock and this time with a powerful left-footer past a diving Majumder.

It was Jayesh Rane who made a dashing run on the left and sent in a through ball to Hernandez before Krishna took control of the ball for a clinical finish.

SCEB almost got an equaliser in the 83rd minute with Pilikington firing in from the left but ATKMB custodian Arindam Bhattacharja managed to palm it away and ensured another clean sheet for Habas's side.

A minute later, Manvir chased a ball from the midfield and made a fine run, beating the SCEB defence before firing past Majumder and sealing three points from the big match.

The red-and-gold brigade wore black armbands in memory of the Argentine legend Diego Maradona who died of heart attack on Wednesday.

Before the kickoff, both the teams observed one minute's silence in honour of Indian football stalwarts P.K. Banerjee and Chuni Goswami who died this year.