With the win, the Mumbai side ensured a top-2 finish in league stage 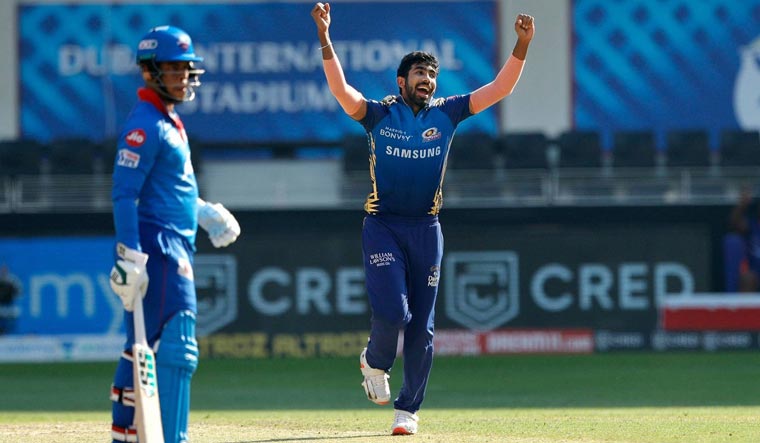 Mumbai Indians ensured a top-two finish in the IPL league table with a clinical nine-wicket decimation of an already battered Delhi Capitals, who wilted under relentless pressure from Trent Boult and Jasprit Bumrah.

While Boult (3/21 in 4 overs) dealt telling opening blows, Jasprit Bumrah (3/17 in 4 overs) broke the backbone of the Delhi Capitals middle-order, choking them to 110 for 9.

The defending champions coasted to victory in 14.2 overs, taking their points tally to 18 and will have two shots in the play-offs to get into the final.

Delhi Capitals, who had won seven out of their first nine games, have now lost four on the bounce and with a match left are in danger of missing out on the play-offs with an ever deteriorating net-run-rate of minus 0.159.

While batting, Delhi Capitals consumed 62 dot balls, which effectively meant that more than half of their stipulated 20 overs had gone without scoring.

A target of 111 can't be defended nine out of 10 times and the pocket dynamo Ishan Kishan scored 72 not out off 43 balls to make the chase look like a walk in the park.

Not for once did Delhi Capitals looked like being in control as they made the Dubai strip and the MI bowling attack look doubly menacing with some of the best batsmen abdicating their responsibilities of playing fearless cricket.

Boult was brilliant upfront removing openers Shikhar Dhawan (0) and Prithvi Shaw (10 off 11 balls) in the powerplay which pegged the Delhi Capitals back.

Captain Shreyas Iyer (25 off 29 balls) and Rishabh Pant (21 off 24 balls) then compounded their team's worries as they failed to regain the lost momentum.

The duo, for the umpteenth time, looked like playing for themselves and the intent was missing which affected the morale of the batsmen coming down the order.

A ball pitched on length was climbing up while moving a shade away which Marcus Stoinis edged to the wicketkeeper.

Pant's misery ended when Bumrah came round the wicket and fired one from wide off the crease that came in with the angle to trap him leg before.

He then tormented Harshal Patel, who played and missed a few before being adjudged leg-before, a decision that couldn't be reviewed as Pant had consumed it during his dismissal.

If Delhi Capitals miss out on a play-off berth, Iyer-Pant duo will have to accept their responsibility as premier international players in this DC line-up.

Pant has been even worse and with each passing match, his wretched form is perhaps a vindication of Sunil Joshi-led national selection committee's decision to drop him for the white ball squads for the Australia tour.