‘Close to playing my best golf,’ says a rejuvenated Lahiri 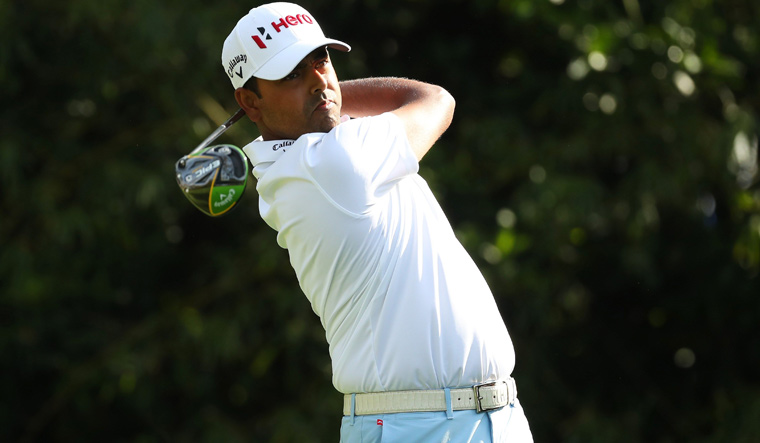 Golfer Anirban Lahiri is the embodiment of patience and perseverance as is evident by his recent performance. It has taken him two years to get back to a top 10 finish on the PGA Tour. It happened at the Corales Puntacana Resort and Club championship in which he finished tied sixth. His last top 10 finish was at the Mayakoba Golf Classic in November 2018. The lone Indian with a full card on the US PGA Tour, Lahiri’s golf rankings plunged from world number 66 in January 2018 to 686 before the Corales Puntacana event.

The turnaround didn’t come on its own; Lahiri went back to the drawing board―quite literally―with his coach Vijay Divecha during the lockdown, and started from scratch post the break.

Speaking to a select group of Indian media from Bermuda where he is currently playing a tournament, Lahiri gave an insight into how he went about deconstructing and then reconstructing his game in Ahmedabad.

“I put a lot of work in during the lockdown when I was in India, put a lot of new processes, refreshed a lot of my old practising and things that used to work for me. So, obviously, the effort is to get back to being able to perform at my best,” he revealed.

“So far this season has been good, I’ve been able to implement a lot of those changes. There’s still some things that are developing. I think as I get more tournaments in, as I get a little more experience in terms of handling some of the new attitudes, new approaches that I have on the golf course, it should gradually get better. Obviously spending extended time with my coach back in India made a huge difference and that’s beginning to show. I trust my game a lot more, hitting my game a lot better, I’m hitting my irons a lot better, which has basically always been my strength and not so much so in the last couple years. So getting back to basics,” the 33-year-old said.

The good performance in the tournament, however, was followed by a modest T-37 at the Sanderson Farms event. Describing his performance this season on the PGA Tour as a mixed bag, Lahiri said the key is to erase inconsistencies in his game and aim for good starts regularly.

“I think it’s been a bit of a mixed bag. I’ve obviously had one good result and a couple of average results. I think the game has been one bad round or mediocre round every event, and there’s been a lot of good golf and a lot of birdies and a lot of other positives as well. For me, it was just identifying where some of those mistakes are coming from and what are the areas I need to tighten up. There’s definitely been some inconsistency with my iron play. My long game and driving by and large has been good. Barring one day out of the three events that I played, my putting’s been pretty solid.

“Things are generally looking in good shape. I don’t think any department’s troubling me at the moment, it’s just a matter of getting off to a good start. That’s something that I haven’t done as consistently. So that’s going to be one of the focuses is to get off to a good start and then keep my foot on the pedal or keep that momentum and keep myself in it all four days.”

Asked how frustrating the last year and a half was for him, the golfer from Bengaluru said these were lessons well-learnt.

“It’s definitely frustrating, but when I look back, I mean, I’ve learned some really, really tough lessons. I’ve realized a lot of things. I think golf, everybody says, is a good reflection of life and I think the last one and a half years is a clear example of that. I can’t say that I worked any less hard than I have in the past, I can’t say I wanted it any less than I do now or I have before. So a lot of things on my end didn’t change, but obviously the results didn’t go my way. I wasn’t playing very well, I was obviously not doing some of the things that I needed to do. But it’s a learning experience. I would like to think that it’s behind me now and I don’t want to really dwell on it except to learn from it. So I'm just focused now on what I need to do going forward.”

Good finishes are crucial this season for Lahiri as these would give him entry to more events. He does have his back against the wall but is not panicking, instead focussing on each tournament at a time.

“I’m in a position where I’m not getting into a lot of events. This is going to be my fourth event of the year and may even be the last just looking at how many entries have come in for the remainder of the events. So I have to make the most of it. I have to try and get as many points up so when the season restarts, whenever I get my next opportunity, I’m not trying to running with a gun to my head. It’s very important for me to get off to that start, so it’s important for me to be focused at every even,” said the golfer.

Being under lockdown in India and then away from golf for many weeks due to the COVID-19 restrictions also allowed Lahiri to mentally refresh himself. He spent time working on the mental aspect of the game, too.

“I came to India for the Indian Open and we all know what happened after that. So yeah, I think being away from the game for 70 something days, I didn’t hit a golf ball, I didn’t have my golf clubs with me. They were at the academy (in Ahmedabad) and that was a challenge. It’s probably the longest I've been away from my clubs for 20 years, maybe more. I think that also gives you some perspective. It builds the hunger to come back and motivates you, something that can suffer when you have an extended period of bad golf like I did, so that was one.”

He spent time with family and his golf friends discussing each other’s game which helped Lahiri put things in perspective, too. So, is he close to playing at his best again?

Lahiri thinks so, but he would rather discover a new “best” in himself having begun his golfing journey a lot fresher and better prepared. The elusive win, he feels, may just be round the corner.

“I am close, I’m definitely close. How close, I don’t know. Might be this week, might be two weeks from now. But again, my best golf is questionable. I don’t know what my best golf is, so we’ll find out. I think if I keep playing to my ability, to my potential, that I can push it further and further and higher and that’s how I want to look at it. Yes, I’m playing much better. I can continue to get better, I can continue to better what is considered my best golf in the past, we don’t know. For me it’s all about staying in the process and keep moving in that direction. As long as I do that, I think you’ll see it soon.”