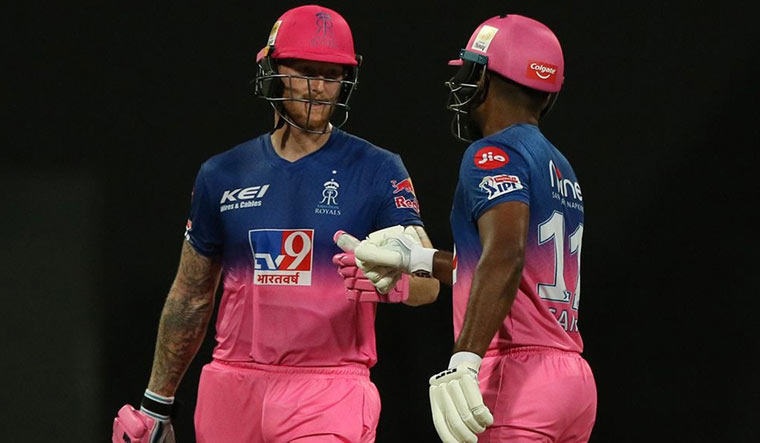 Ben Stokes (left) and Sanju Samson of Rajasthan Royals in action during the IPL 2020 match against Mumbai Indians at the Sheikh Zayed Stadium, Abu Dhabi | iplt20.com

Stokes, who plundered 14 fours and three sixes in his unbeaten 60-ball 107, found an able ally in Sanju Samson (54 not out off 31) as their unbroken 152-run partnership allowed Royals to make short work of the 196-run target. They cantered to victory in 18.2 overs.

Mumbai had put up an imposing 195 for five courtesy a 21-ball 60 Hardik Pandya, who smashed seven sixes and two fours. It was the fourth loss for Mumbai, who remain in comfortable position at the top of the standings.

The comprehensive win over defending champions not only kept Royals alive in the tournament, but it also eliminated Chennai Super Kings from the competition.

The night belonged to Stokes, who tore into the Mumbai attack after RR lost opener Robin Uthappa (13) and Steve Smith (11) early. The southpaw was back to his very best, having struggled with his timing in the earlier games.

Samson joined Stokes, who had collected four boundaries off Trent Boult in the third over.

The Englishman then went on offensive against Krunal Pandya, collecting two fours before a boundary and six against Rahul Chahar with Royals racing to 75 for two after eight overs.

Stokes and Samson played shots at will with RR collecting 18 and 19 runs off the 13th and 14th over bowled by James Pattinson and Chahar.

Stokes completed his 100 in 59 balls, with a thumping six over deep mid-wicket and fittingly finished the match with a boundary.

Earlier, Mumbai suffered a mini-collapse in the middle-overs and but late hitting from Hardik and Saurabh Tiwary (34 of 25) enabled the defending champions to amass 74 runs in the last four overs.

Tiwary and Hardik shared a 64-run stand for the fifth wicket.