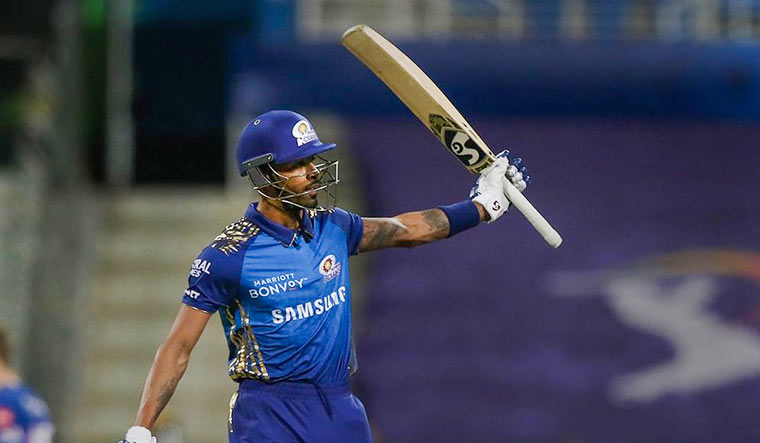 Hardik Pandya displayed his rare six-hitting ability for the first time this season as his unbeaten 60 off 21 balls propelled Mumbai Indians to an imposing 195/5 against Rajasthan Royals in an IPL match in Abu Dhabi on Sunday.

Mumbai suffered a mini-collapse in the middle-overs and but late hitting from Hardik, who plundered two fours and seven sixes, and Saurabh Tiwary (34 of 25) enabled the defending champions to amass 74 runs in the last four overs.

Tiwary and Hardik shared a 64-run stand for the fifth wicket.

Tiwary was brutal against Archer (2-31) in the 17th over, smashing two fours and a maximum while Hardik hammered four sixes off Ankit Rajpoot (0-60) in the 18th over, which went for 27 runs.

Hardik launched into Kartik Tyagi (1-45) in the final over, hitting him for three sixes and two fours. His blitzkrieg can prove to be the difference in the game.

Kishan and Surya again tore into pacer Rajpoot, smashing a six each as Mumbai raced to 59 for one after six overs.

Surya went on the offensive against Shreyas Gopal, collecting two boundaries in the ninth over.

But Rajasthan pulled things back by dismissing Kishan, Surya and Kieron Pollard (6) in quick succession as Mumbai slipped to 101 for four.

Tyagi, and then Gopal removed Surya and Pollard in the 13th over.

While Surya gave a sitter to Ben Stokes, Pollard was undone by a googly, which uprooted his stumps.

Thereafter, it was the Hardik Pandya show.