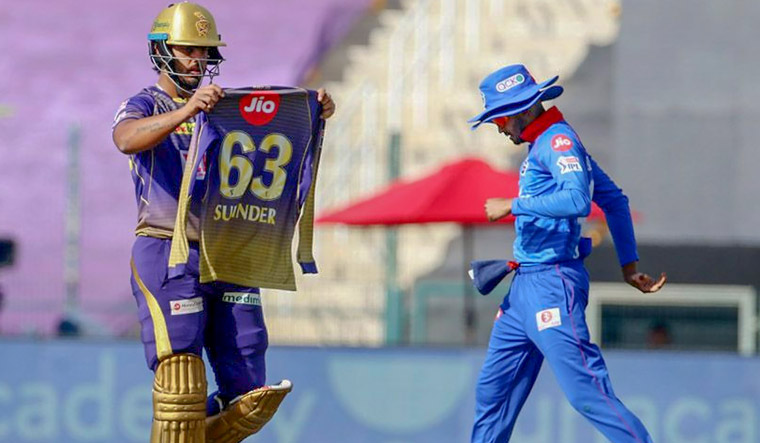 Nitish Rana revelled in his new opening role with a whirlwind 81, while Sunil Narine smashed a 32-ball 64 to propel Kolkata Knight Riders to a commanding 194/6 in their IPL match against Delhi Capitals here on Saturday.

Promoted to open, Rana smashed 13 fours and one six in his 53-ball 81, while Narine also came out all guns blazing, smacking four sixes and six fours as KKR put behind their horror show against Royal Challengers Bangalore to post a stiff total after being asked to bat.

The left-handed duo stitched together 115 runs from just 59 balls to seize the momentum.

Having crumbled for 84 in their last match against RCB, KKR once again were staring down the barrel at 42/3 after 7.2 overs.

Anrich Nortje grabbed the wickets of the under-performing Shubman Gill (9) and Rahul Tripathi (13) inside the Powerplay, while Kagiso Rabada accounted for Dinesh Karthik (3).

Just when KKR's tale of batting woes began to unfold, Rana came into do the rescue act, taking the attack to the experienced R. Ashwin in an over that yielded 13 runs.

Rana first smacked Ashwin's tossed up delivery for a six and followed it up with a boundary.

In the next over, Narine joined in to continue KKR's run feast in the back-end of the innings in an incredible partnership.

DC brought back Nortje but there was no respite for them and Rana brought up his fifty with an outside edge.

He was then seen dedicating his half-century to his father-in-law, who died of cancer recently, by showing a jersey customised by KKR as a special tribute to him.

Narine then hammered Marcus Stoinis by hitting him for a six and a four making the formidable DC attack look mediocre.

For Delhi, Ashwin was the most expensive and looked ordinary, conceding 45 runs from his three overs, while Nortje (2/27), Rabada (2/33) and Stoinis (2/41) took two wickets each.