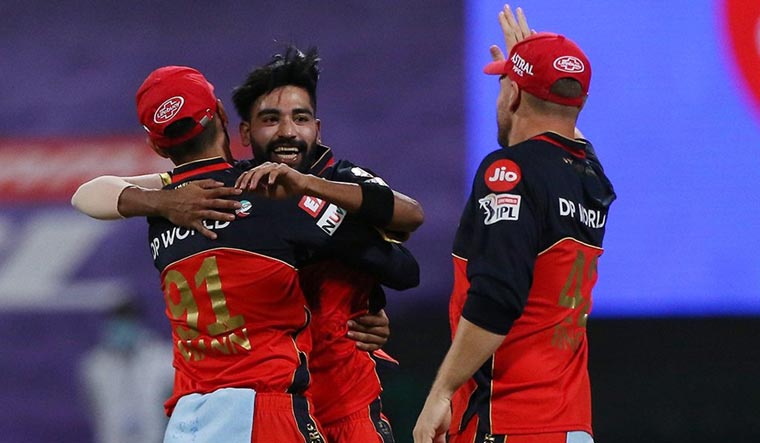 KKR skipper Eoin Morgan's decision to bat first backfired miserably, as Siraj ran through the top-order. Bowling the second over of the match, the right-arm pacer removed opener Rahul Tripathi (1) and Nitish Rana (0) off successive balls. Tripathi nicked one straight back to AB de Villiers behind the stumps and in the next ball Siraj ran through the gates of Rana for a golden duck.

He returned for a second wicket-maiden, getting Tom Banton (10) to edge one to de Villiers. He thus became the first bowler to bowl two maidens in one IPL match. His figures at the end of the spell read 3-2-2-3. Siraj finished with 3/8 in his four overs.

RCB skipper Virat Kohli kept up the pressure at the other end, too, ringing in the bowling changes, and Yuzvendra Chahal (2/16), Washington Sundar (1/14), Chris Morris (0/16 in four overs) responded well to restrict KKR to 84/8 in 20 overs. It was the lowest score in a 20-over IPL innings without a team getting bowled out. It is KKR's second-lowest total after their 67 all-out against Mumbai Indians in 2008.

Morgan was KKR's top scorer, with 30 runs. The Kolkata side replaced injured Andre Russell and Shivam Mavi with Banton and Prasidh Krishna.

RCB brought in Siraj by dropping Shahbaz Ahmed, and it proved to be the game-changer.