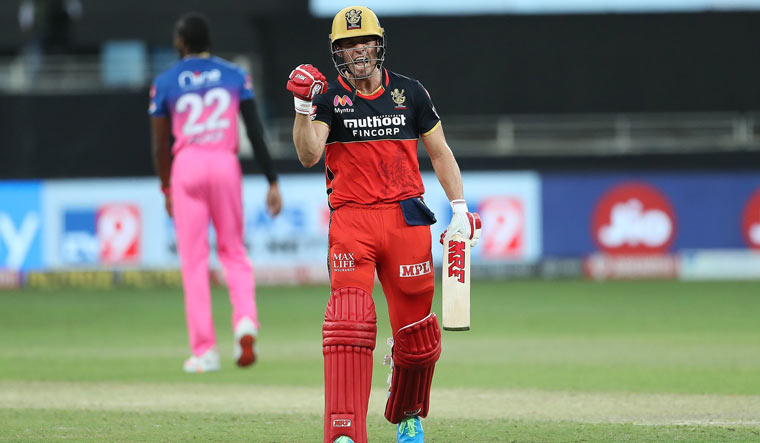 Chasing 178, De Villiers smashed six sixes to help RCB win the game after all seemed lost for them following the dismissal of Virat Kohli with the team struggling at 104 for three in the 14th over.

The seasoned South African launched into Jaydev Unadkat for three successive sixes in the 19th over to swing the match in his team's favour. He finished the game in style, hitting Jofra Archer for a maximum, with two balls still to go.

Kohli and Devdutt Padikkal stitched a 79-run partnership for the second wicket but consumed too many deliveries in doing so, failing to keep pace with the required run rate.

Kohli brought the team's hundred by lofting Rahul Tewatia for a big six over long-on, but Padikkal, while trying to break the shackles after struggling his way to 35 off 37 balls, got out when his pull shot failed to clear Ben Stokes in the deep.

And then came the big wicket of Kohli, thanks to a brilliant piece of fielding by Tewatia, who pulled off a catch inches from the line at deep midwicket on the rebound after the batsman whipped it off his pads.

The ball travelled at a great speed but Tewatia, coming off a wicket in his previous ball, balanced himself after nearly falling over the line to complete a fine catch.

Kohli made 43 off 32 balls with the help of two sixes and a four.

The required run rate rose rapidly as RCB struggled to find the big overs, but de Villiers had other ideas.

Smith struck six fours and one maximum before Chris Morris bowled a brilliant final over, conceding only four runs while taking two wickets to check RR from going past 180.