Chasing 172, KXIP reached the target off the last ball of their innings 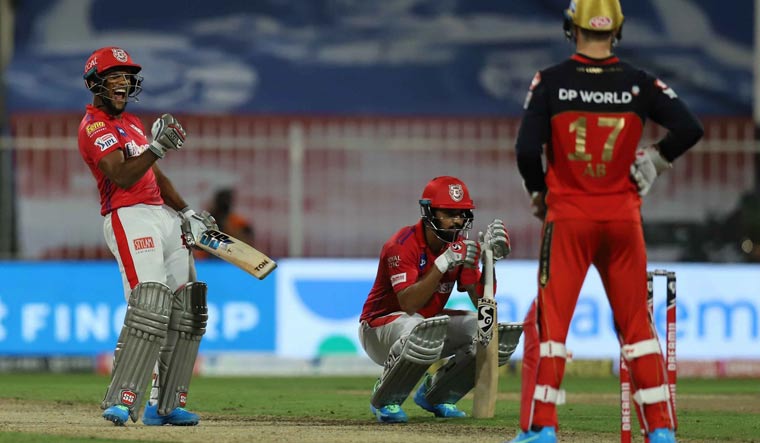 Nicholas Pooran of Kings XI Punjab celebrates their win while skipper K.L. Rahul looks on, during the IPL 2020 match against Royal Challengers Bangalore at the Sharjah Cricket Stadium | iplt20.com

Kings XI Punjab nearly messed up a routine chase yet again, as they survived a scare to beat Royal Challengers Bangalore by eight wickets in an IPL 2020 match at Sharjah. It was only their second win of the season – both coming against the RCB.

Chasing 172 to win, the Punjab side got off to a flying start, courtesy the tournament's first and second top run-scorers – skipper K.L. Rahul (61 off 49 balls) and Mayank Agarwal (45 off 25). The duo put on 78 runs for the first wicket in just eight overs.

Agarwal's dismissal off Yuzvendra Chahal (1/35 off 3 overs) - castled while trying to hoick the bowler across the line – brought 'Universe Boss' Chris Gayle to the crease. Playing his first match this season, the West Indian great quickly settled down and, in the company of Rahul, took the RCB bowlers apart.

The decision to hand the ball to Siraj, who had been expensive, by Kohli was one of the several surprising decisions taken by the skipper in the match. Experienced pacer Isuru Udana still had three overs in his kitty, but Kohli threw the ball to Siraj. Also, Sundar, who had been brilliant in the Powerplays in the earlier matches, was not bowled in the first six overs today. All-rounder Shivam Dube was not bowled at all in the match.

That the match even went to the last ball of the innings was because of some brilliant death bowling by Chris Morris (0/22 off 4), and Udana (0/14 off 2). Needing just two runs in the last over by Chahal, KXIP lost Gayle (53) to a run out, before Nicholas Pooran managed a six off the last ball to complete a narrow win.

Earlier, while RCB were batting, in-form batsman and last-match hero AB de Villiers was not sent out to bat at his usual number four position. With two leg-spinners in operation, left-handed batsmen Washington Sundar and Shivam Dube were sent ahead of the South African. The move did not work as Sundar struggled to 13 off 14 balls, while Dube scored 23 off 19.

It was Morris again who came to RCB's rescue with a eight-ball 25* to take the score to 171/6 in 20 overs. The last over from Mohammed Shami went for 24 runs. The veteran Indian pacer had bowled a brilliant over earlier where he dismissed Kohli (48 off 39 balls) and de Villiers (2).

KXIP, whose bowling has been the weakest link, did rather well from 11-14 overs conceding just 20 runs to put pressure on the opposition. Murugan Ashwin was the pick of the KXIP bowlers, taking 2/23 in his four overs.