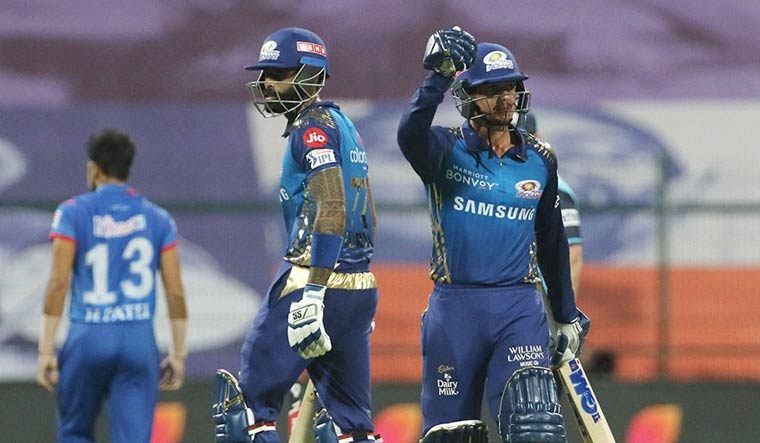 Fluent and fiery half centuries by Quinton de Kock and Suryakumar Yadav shaped Mumbai Indians' five-wicket win over Delhi Capitals in the clash between the two most consistent IPL sides of the season, in Abu Dhabi on Sunday.

Chasing 163, the defending champions overhauled the target with two balls to spare and claimed the top spot in the points table with five wins from seven matches so far.

Shikhar Dhawan scored his first half-century of the season and shared a 85-run stand with skipper Shreyas Iyer (42) to help DC post 162 for four.

DC's competitive-looking total proved insufficient in the face of some confident batting by the Mumbai Indians batsmen.

Kieron Pollard (11 not out) and Krunal Pandya (12 not out) took MI past the finish line after de Kock and Suryakumar laid the foundation with their knocks and Ishan Kishan (28 off 15 balls) chipped in with a useful cameo.

De Kock's 53 came off 36 balls with three sixes and four shots to the fence, while Suryakumar took 32 balls for his 53 that was studded with six fours and a six.

After losing Suryakumar and Hardik Pandya (0) in quick succession, MI also lost Kishan towards the end but there was no twist in the tale.

To their credit, Kagiso Rabada (2/28) and Anrich Nortje dragged it to the last over with their incisive bowling.

DC's spin all-rounder Axar Patel, who has made an impact since replacing Amit Mishra, got the big fish when he sent back dangerous Rohit Sharma just when he was looking to break the shackles.

Rohit was already struggling and it was de Kock, who was doing the bulk of scoring. The South African was in tremendous touch and in no time raised his fifty with a boundary off Harshal Patel.

Suryakumar, who replaced Rohit at the crease, also struck the ball hard and clean from the word go.

However, Ravichandran Ashwin applied some brakes by inducing a top-edge from de Kock, who tried a sweep and was holed out to Prithvi Shaw at deep square leg.

Suryakumar was watching the ball nicely but did not give enough respect to Rabada and paid the price. Similarly, young Kishan should have finished off the game himself but lost his wicket by being over aggressive against Rabada.

Earlier, Dhawan's unbeaten 69-run knock came off 52 balls with six fours and a six, while Iyer's 33-ball 42 had five shots to the fence.

Rohit smartly used his spinners in the middle overs and and kept Jasprit Bumrah's quota for the slog overs.

Spin duo of Krunal (2/26) and Rahul Chahar conceded only 53 runs in their eight overs.