Carreno Busta, Djokovic get rematch at Roland Garros after US Open 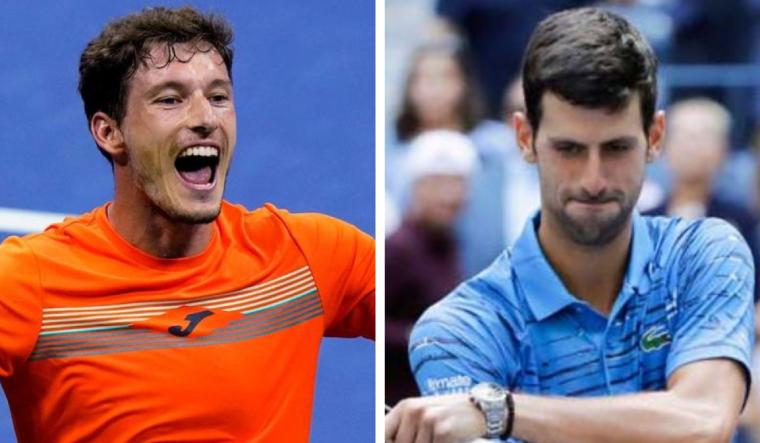 No. 17 seed Pablo Carreno Busta set up a rematch against Novak Djokovic by reaching the second French Open quarterfinal of his career.

Carreno Busta was visited by a doctor after the second set but continued to play well and beat 186th-ranked qualifier Daniel Altmaier 6-2 7-5 6-2 at Court Philippe Chatrier.

It wasn’t immediately clear what was wrong with Carreno Busta.

At the US Open last month, Carreno Busta was the opponent who advanced when Djokovic was defaulted from their fourth-round match for accidentally hitting a line judge with a ball after a game in the first set.

Carreno Busta, a 29-year-old from Spain, would go on to reach the semifinals in New York before blowing a two-set lead against eventual runner-up Alexander Zverev.

Carreno Busta also was a quarterfinalist in Paris in 2017.

The 22-year-old Altmaier was trying to become the first man since 1996 to get to the quarterfinals of his first Grand Slam tournament. He hadn’t dropped a set until Monday.

Elsewhere, Australian Open champion Sofia Kenin turned things around at the French Open after a poor opening set to reach the quarterfinals at Roland Garros for the first time.

The No 4-seeded Kenin beat the 49th-ranked Fiona Ferro 2-6 6-2 6-1 at Court Philippe Chatrier. Ferro was the last French man or woman still around in singles.

Alexander Kenin had changed seats during the match to be right next to Ferro’s coach, Emmanuel Planque, who was closer to the court.

Kenin upset Serena Williams at last year’s French Open en route to making it to the fourth round. But until now, the 21-year-old American had never been to the quarterfinals at any clay-court tournament.

She won her first grand slam title at Melbourne Park at the start of this season and now is 14-1 at major tournaments in 2020.

Kenin won’t find out who her next opponent is until Tuesday. That’s because the fourth-round match between another American, Danielle Collins, and 30th-seeded Ons Jabeur of Tunisia was rained out Monday and delayed a day.