Amit Mishra, Bhuvneshwar Kumar out of IPL 2020 due to injuries

Kumar could miss tour of Australia, too 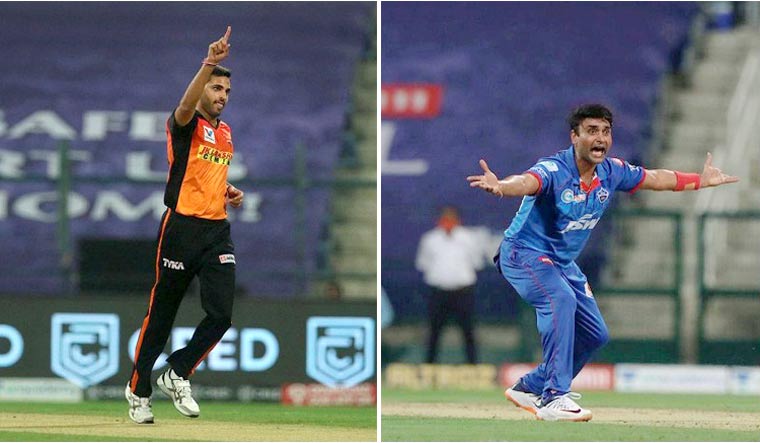 Senior leg-spinner Amit Mishra was ruled out of the ongoing IPL along with pacer Bhuvneshwar Kumar, who could also miss the tour of Australia at year-end, after the duo sustained different injuries while competing for Delhi Capitals and Sunrisers Hyderabad respectively.

While DC's Mishra fractured his ring finger while bowling against Kolkata Knight Riders on October 3, Bhuvneshwar picked up the thigh muscle injury on October 2 when SRH took on Chennai Super Kings. He is likely to be out of reckoning for the much-awaited trip Down Under.

The 37-year-old Mishra had three wickets from three games this season while Bhuvneshwar also had equal number of scalps albeit after playing a match more.

"Amit has fractured his ring finger and is out of IPL tournament. Obviously, it is a very disappointing news considering he was integral to DC's plans," a source from Mishra's management team confirmed the development to PTI.

Delhi Capitals' later issued a press release, stating that the bowler will consult a specialist on his return to India for recovery and rehabilitation.

"Mishra will now consult with a specialist over the next few days to determine the most appropriate course of management for this unfortunate injury. Everyone at Delhi Capitals wishes him a speedy recovery," the statement read.

As far as Bhuvneshwar is concerned, the extent of his injury is still not clear but it could take a good 6-8 weeks for the 30-year-old to completely recover from the setback.

"Bhuvneshwar Kumar is out of IPL with a thigh muscle injury. It is probably a grade 2 or 3 injury, which could mean that he would be out for at least 6 to 8 weeks. It might effectively rule him out of India's tour of Australia," a senior BCCI official told PTI on conditions of anonymity.

What will hurt the franchises is the fact that both bowlers were integral to the team's plans.

Mishra, as a wrist-spinner, was important strategically for Capitals on bigger grounds as he showed his skills against Chennai Super Kings with brilliant figures of 4-0-23-0. He returned 1/14 in 2 overs, including the wicket of Shubman Gill, against KKR.

It was while trying to get hold of a return catch offered by Nitish Rana that Mishra fractured his finger which forced him to leave the ground.

While Capitals do have a wrist spinner in Nepal's Sandeep Lamichhane, it is expected that Axar Patel and Ravichandran Ashwin will be handling the spin department primarily.

In case of Bhuvneshwar, the injury was sustained while bowling the 19th over of CSK's innings during their clash here.

There was heavy strapping on his thigh but he was in so much pain that he hobbled out of the ground after sending down just one ball as Khaleel Ahmed finished his over.

His injury will be a massive blow to SRH skipper David Warner as he struggles for quality death bowlers in his side which is short on experience.

In case of Bhuvneshwar, he might stay back in the UAE as the Indian team's physio Nitin Patel is also there as part of the BCCI's medical team.

Being a centrally-contracted player, Bhuvneshwar's rehabilitation will be entirely looked after by the BCCI.

However, for the past one year Bhuvneshwar has been mostly out, due to side strain and hamstring injuries and only recently, made a comeback during the IPL. He had missed the New Zealand tour earlier this year.

With this current injury, his readiness to return to competitive cricket after breaking down every three months during the last one year could raise eyebrows about the injury management process.

India are to play four Test matches during the tour of Australia at year-end.