Chasing a stiff target of 192, Kings XI Punjab were stopped at 143 for eight 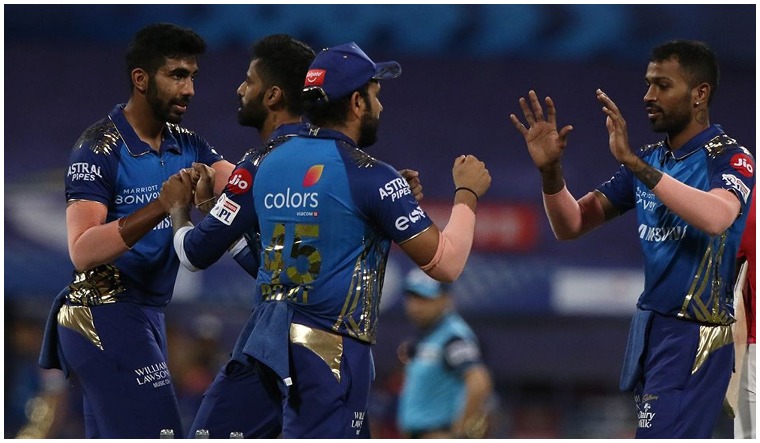 Rohit Sharma's elegance mingled with the belligerence of his two six-hitting lieutenants as Mumbai Indians humbled Kings XI Punjab by 48 runs in an IPL match in Abu Dhabi on Thursday.

Invited to bat, the classy Rohit laid the foundation with a 45-ball 70, lacing his innings with eight fours and three sixes.

Then, the duo of Kieron Pollard and Hardik Pandya smashed fours and sixes at will, scoring 67 runs in 23 balls to lift MI to 191 for four from 83 for three in the 14th over.

Chasing a stiff target of 192, Kings XI Punjab were stopped at 143 for eight, with Nicholas Pooran making 44 off 27 balls.

Earlier, Pollard walked out unbeaten on a 20-ball 47, while Hardik remained not out on 30 off 11 balls, the two hitting six sixes and as many fours between them.

MI got 25 runs in the final over with Pollard sending Krishnappa Gowtham's last three balls into the stands of the Sheikh Zayed Stadium, scored 19 off the penultimate over and 18 in the 18th.

A total of 104 runs came in the last 36 balls despite one excellent over in between by Mohammed Shami.

In reply, KXIP lost wickets at regular intervals to lose their second match on the trot. They were never in the game after losing the wickets of the in-form opening duo of skipper K.L. Rahul and Mayank Agarwal, even though Pooran played a few handsome shots.

For Mumbai Indians, there were two wickets apiece for James Pattinson, Rahul Chahar and Jasprit Bumrah.