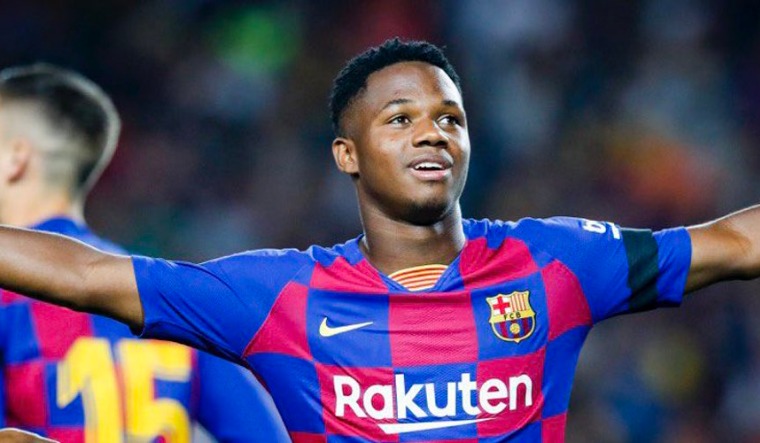 Teenager Ansu Fati scored again to help give Barcelona a second straight win to start the Spanish league season with a 3-0 victory at Celta Vigo.

Barcelona won comfortably despite playing more than half the game with 10 men after defender Clément Lenglet was sent off before the break on Thursday.

Fati also scored twice to lead Barcelona to an opening win against Villarreal on Sunday. The 17-year-old forward found the net against Celta with a neat touch with the outside of his foot from inside the area after a pass by Philippe Coutinho in the 11th minute.

Fati, who was added to the first-team squad this season, has quickly stepped up to take over the scoring role of striker Luis Suárez, who was let go by the club and joined rival Atlético Madrid.

It was the first loss for Celta, which had a win and two draws from its first three games. It hadn't lost to Barcelona at home in five years, with three wins and two draws in league matches.

Barcelona went a man down in the 42nd after Lenglet was shown a second yellow card for hitting Denis Suárez in the face while opening his arm to keep the Celta player from getting past him.

Barcelona had almost gone a man down in the 35th when Gerard Piqué held back Suárez to stop a breakaway, but an offside call prompted the card to be reversed.

Despite the man disadvantage under pouring rain at the Balaídos Stadium in Vigo, Barcelona added to the lead in the 51st with an own-goal by defender Lucas Olaza, who redirected the ball into his own net after Lionel Messi got past two defenders and made a cross into the area.

Sergi Roberto closed the scoring with a shot from inside the area after more build-up play by Messi late in stoppage time.

Messi had a goal disallowed by offside in the 59th off the rebound of a Coutinho shot that hit the post.

Sevilla, Barcelona's opponent in the next round, won its second in a row by defeating Levante 1-0 at home, thanks to Youssef En-Nesyri's goal two minutes into stoppage time.

En-Nesyri headed in a cross from Jesús Navas.

Like Barcelona and Atlético Madrid, Sevilla had its first two league matches postponed because of their participation in European competitions in August.

Promoted Cádiz won 1-0 at Athletic Bilbao despite finishing the match with nine men because of red cards.

The winner came with a 57th-minute own-goal by Athletic midfielder Unai López, who on Sunday scored twice to lead his team to victory at Eibar.

Cádiz, which had lost two of its first three games, had Carlos Akapo sent off in the 48th and Álvaro Negredo in the 70th.

Real Madrid defeated Valladolid 1-0 on Wednesday, while Atlético Madrid was held by Huesca to a scoreless draw.