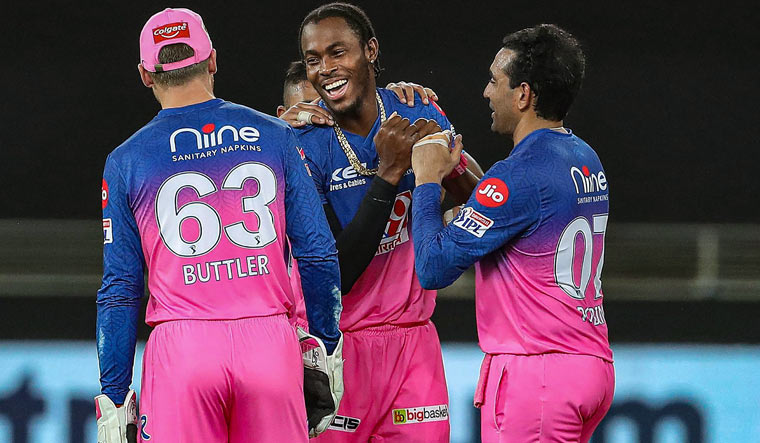 Kolkata Knight Riders found a fast and furious Jofra Archer too hot to handle as they were restricted to 174 for six by Rajasthan Royals in their IPL match in Dubai on Wednesday.

Archer (2/18) hit the deck hard and clocked the fastest delivery of the tournament (152.1 kph) in a fiery spell, taking two key wickets of KKR—in-form opener Shubman Gill (47 from 34 balls) and skipper Dinesh Karthik (1)—after the Royals opted to field.

With Archer triggering a mid-innings collapse, the big-hitting Andre Russell (24 from 14) too was dismissed cheaply and it was left to England World Cup-winning skipper Eoin Morgan (23-ball 34 not out) to stay till the end.

Archer bowled the first over of the match and there was full pace in display in the range of 145-150kph mark and it needed Gill's brilliance to see him off with just one run from it.

With Gill looking well set for a second successive fifty, Archer was reintroduced in the 12th over and he dismissed the set opener straightway with a leading edge.

In his next over, Archer dismissed Karthik with a beauty, full of pace that went straight with a bit of inswing and the KKR skipper was forced to play, edging straight to Jos Buttler.

Russell was finally promoted up at No. 5 but the star Jamaican became victim of Ankit Rajpoot while trying to accelerate the scoring rate.

Russell's wicket meant KKR lost four wickets for 33 runs in the back-10 and with KKR playing with an extra bowler, it was left to Morgan to prop up the total.