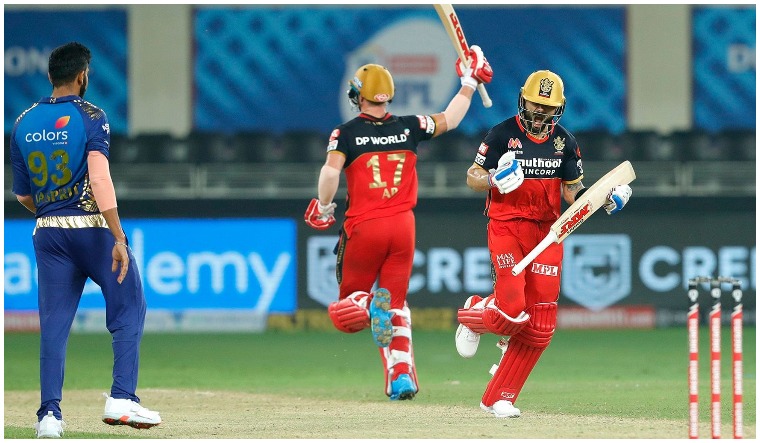 Royal Challengers Bangalore edged out Mumbai Indians in a thrilling Super Over in the IPL 2020 match on Monday in Dubai, after the match was tied in the regulation 20 overs.

With the scores tied on 201, Navdeep Saini bowled the Super Over for the RCB, conceding only seven runs against the likes Kieron Pollard and Hardik Pandya. AB de Villiers and Virat Kohli then sealed the win off Jasprit Bumrah, with the RCB skipper hitting the winning runs—a boundary.

Chasing a target of 202, Mumbai Indians managed to reach 201/5, thanks to a brilliant Ishan Kishan (99 off 58 balls) and the ever-dependable Pollard (60 off 24 balls). The duo nearly pulled off an incredible chase but could manage 18 off the required 19 runs in the last over bowled by Sri Lankan Isuru Udana.

Earlier, after being put into bat, half-centuries from de Villiers, Aaron Finch and Devdutt Padikkal propelled RCB to 201/3.

For MI, Trent Boult took two wickets for 34 runs while Rahul Chahar got the other wicket.