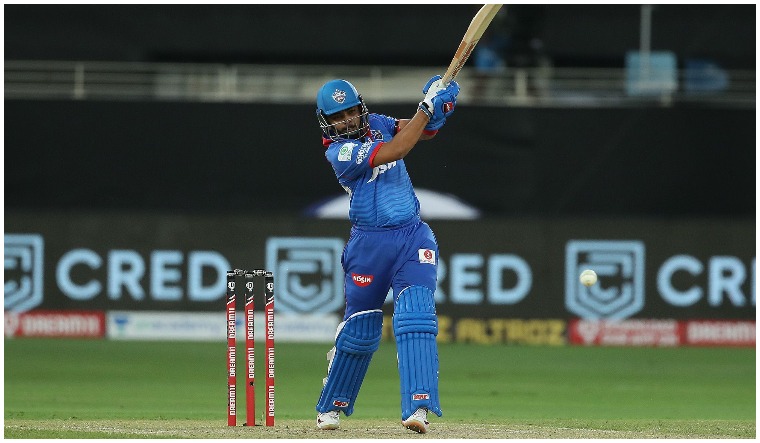 Prithvi Shaw of Delhi Capitals during the IPL 2020 match against Chennai Super Kings at the Dubai International Cricket Stadium | iplt20.com

Young Prithvi Shaw struck a fluent half-century and shared a 94-run opening stand with Shikhar Dhawan to guide Delhi Capitals to 175 for three against Chennai Super Kings in an Indian Premier League match on Friday.

The duo started slowly, scoring just 36 runs of the first six overs of powerplay before opening up to stitch 94 runs for the opening wicket in 10.4 overs.

Shaw got into his stride, hitting two consecutive boundaries off Deepak Chahar.

The Mumbai youngster didn't appear to rush things and played some attractive shots.

Once CSK skipper Mahendra Singh Dhoni introduced the spin duo of Piyush Chawla and Ravindra Jadeja in the seventh over, both Shaw and Dhawan went on the offensive.

Chawla, who was taken apart by Sanju Samson in their previous game against Rajasthan Royals, came in for some rough treatment as did Jadeja who went wicketless in his four overs (0/44).

Dhawan after playing second fiddle for a while, joined the party and hit a couple of attractive boundaries and slogged Jadeja's first ball for a six over mid-wicket.

The DC openers hammered 58 in the next 4.4 overs after the slow start.

Chawla broke the dangerous-looking partnership by removing both Dhawan and Shaw in consecutive overs.

Rishabh Pant (37 not out, 25 balls) and captain Shreyas Iyer (26, 22 balls) pushed the scoreboard along before the latter was caught by a diving Dhoni off Sam Curran as CSK managed to pull things back.