Sunrisers lost their last eight wickets for a mere 32 runs 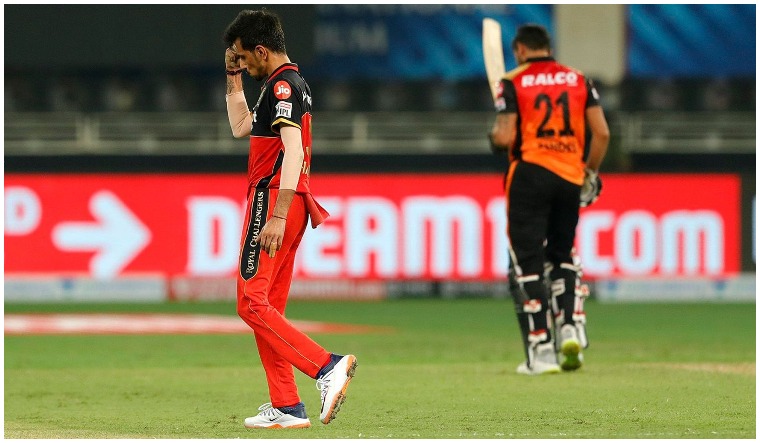 Yuzvendra Chahal celebrates the wicket of Manish Pandey of Sunrisers Hyderabad during an IPL 2020 match at the Dubai International Cricket Stadium | iplt20.com

Royal Challengers Bangalore made a triumphant start to their IPL 2020 campaign with a fighting 10-run win over Sunrisers Hyderabad, in Dubai.

Chasing 164 to win, SRH were cruising at 121/2, with opener Jonny Bairstow looking solid on a breezy half-century. However, Yuzvendra Chahal turned the match on its head, dismissing Bairstow (61) and Vijay Shankar (0) off successive deliveries in the 16th over.

The leg-spinner’s double strike triggered a dramatic collapse, as Sunrisers folded up for 153 in 19.4 overs.

Earlier, after being put into bat, RCB openers Devdutt Padikkal (who made 56 on his IPL debut) and Aaron Finch (29) put on a 90-run stand, to give their team a strong start. Though SRH managed to pull things back after their dismissals in consecutive overs, AB de Villiers (51) ensured RCB reached a competitive total of 163/5.

There was also an injury scare for SRH, with Australian all-rounder Mitchell Marsh limping off the field with an ankle injury after bowling four balls in his debut game for the Sunrisers. He returned to bat but was seen hobbling in pain.