Neymar alleges he was racially abused by Marseille player

The match, which Marseille won 1-0, saw at least a dozen yellow cards 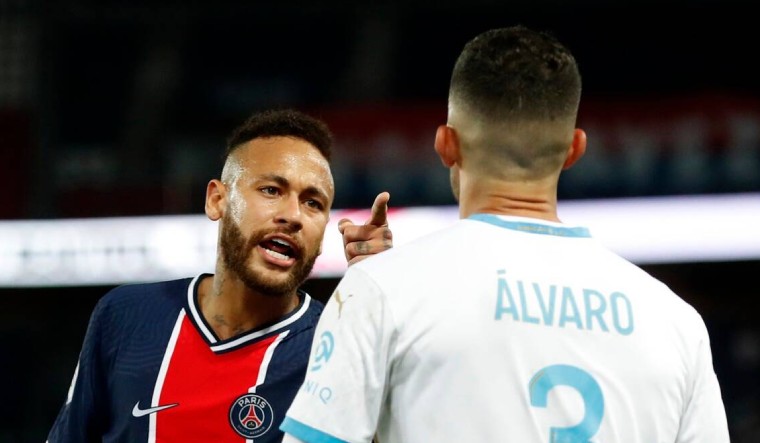 Paris Saint-Germain star Neymar has made allegations that Olympique de Marseille player Alvaro Gonzalez racially abused him during their Ligue 1 match on Sunday. Marseille beat rivals PSG 1-0 on Sunday for the first time in nine years as Neymar and four others were sent off in stoppage time.

Florian Thauvin scored in the 31st minute of the match, helping Marseille win for the first time since its 3-0 victory over PSG at home in November 2011.

However, the match saw at least a dozen yellow cards with players being sent off for exchanging punches and kicks.

Neymar had an altercation with Gonzalez and was sent off upon receiving a red card after a video replay showed him aiming a jab at the back of the Marseille player’s head.

The Brazilian then told match officials that he had been racially abused by Gonzalez. Neymar later tweeted, “The only regret I have is not hitting the face of this idiot.”

“VAR catching my “aggression” is easy ...,” he said in another tweet, adding that he wanted to see the image of Gonzalez calling him by a racist slur. “What about them,” he asked after saying he was punished.

PSG coach Thomas Tuchel said that while he didn’t hear anything on the field, Neymar told him that it was a racist insult. “Racism in life, in all domains, in sport, should not exist,” he added.

“It’s a serious wrongdoing if that’s the case but I don’t think so. What we saw, what was visible, is that (Angel) Di Maria spat (on Gonzalez),” Villas-Boas said.

PSG sporting director Leonardo said they will look into the matter.

“The fight is something very serious. We will deal with that internally with our players. We will have to look at everything to take a coherent stance but the situation is serious.”

Neymar, along with Di Maria, Paredes, captain Marquinhos, Mauro Icardi and Keylor Navas, had tested positive for COVID-19 following a holiday in Ibiza soon after losing the Champions League final.

Kylian Mbappe also tested positive for the viral infection but during international duty with France.