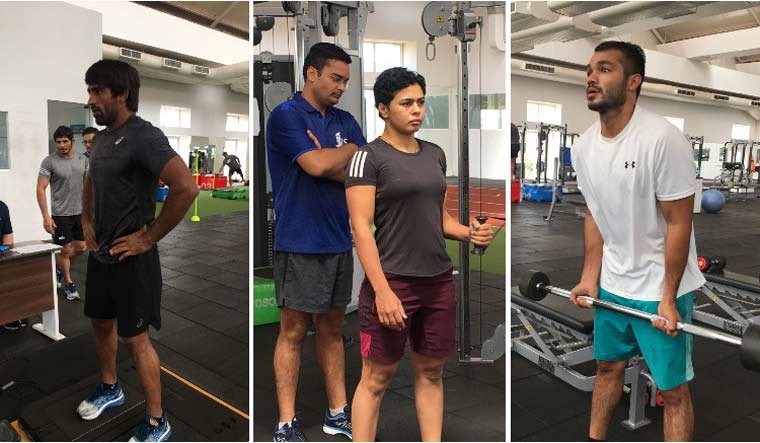 With the scourge of the coronavirus pandemic continuing unabated all over India, elite athletes have been forced to look at novel ways to train during the long lockdown and post it. Coping with COVID-19 has been an unprecedented challenge for the athletes, coaches, sports administrators alike. Even though the unlocking process has allowed resumption of physical and sport activities, the dangers are real and continue to overshadow every decision.

As national camps for hockey, athletics, badminton and boxing have begun at SAI centres in Patiala, Bengaluru and Hyderabad, not surprisingly, the first few positive cases, too, have emerged.

Far away from the bustle of urban life, ensconced in Vijayanagar, Bellary, Inspire Institute of Sport—the high performance centre set up by JSW Group—has provided a safe haven and uninterrupted training for around 100 sportspersons on its 42-acre state-of-the-art campus. Elite athletes, including wrestlers Bajrang Punia, Pooja Dhanda and boxer Vikas Krishan Yadav, have made the IIS their base ever since the unlocking started. Giving them company are Indian football team skipper Sunil Chettri and the Bengaluru Football Club academy team members and kabbaddi players, too.

Speaking on the occassion of the institute's second anniversary, CEO Rushdee Warley said all measures to ensure a secure, sanitised campus for the athletes have been taken. The athletes have access to the best of training facilities, albeit with restrictions.

Explaining the COVID-19-induced changes in athletes programmes, especially for those who are set to compete at the Tokyo Olympics next year, Manisha Malhotra, head of sports excellance and scouting, JSW Sports, said that the break allowed elite athletes to undergo off-season training which they normally do not do. "Postponement of Tokyo Olympics has affected athletes. It is unprecedented. But it can definitely work in our favour,” Malhotra said. “Most athletes were over trained. This (lockdown break) allows them to step back, look at their game and prepare with clarity. They never go into off-season. They are coming through a intense competitive season in 2019, and this time can be used to regroup mentally and physically. It's a chance to go back to the basics, because a strong base always helps. We do not know yet what others (opponents) are up to. We will only know once competitions resume."

Malhotra said all top athletes have had to alter their training programme in drastic ways. "We are trying to get athletes to try other dimensions in training and every one has embraced these changes."

Pooja Dhanda, a 2018 Commonwealth Games silver medallist, has battled injuries in 2019 and was looking for a last-minute qualification for Tokyo Olympics when lockdown was announced. "For me 2019 was all about injuries, so I was very happy when the Olympics got postponed by a year. I see this as a chance for me to ensure Tokyo qualification. Training alongside seniors like Bajrang has also helped me to learn a lot."

The Haryana grappler, who competes in the 57kg category, has taken a pragmatic approach towards the pssibility of attending a national camp beginning September 1 in Lucknow. "I guess we all have to learn to live with coronavirus for now. If the Lucknow camp starts, so be it. I am looking to be as fit as possible to be able to beat my opponents in the national trials or the world championships scheduled for December as of now."

Pugilist Vikas Krishan Yadav (75kg category) decided to pause his professional boxing career to take a shot at Olympic glory for the third time. He is the only boxer after Vijender Singh to qualify for three successive Olympics. He won silver at the Asian Games 2018 and qualified for Tokyo 2020 via the Olympic Qualifiers in Amman, Jordan in March this year. "I will resume the pro-boxing competition now in September-October, and then start preparing for the Games from January. I don't see preparations getting affected due to the postponement, it's a problem only for those who are yet to qualify. I see this in a positive way—the postponement gives me more time to prepare unlike last two Olympics where I qualified late."

Wrestler Bajrang Punia, too, is making the most of his stay at the IIS, removing any chinks in his armour. What has also added to his delight is that his coach Shako Bentinidis has also joined him at the IIS last week. "He has come to India despite a surge in cases here. I am really thankful to him for doing so. We will watch all the videos of my opponents and look to erase any shortcomings in my game in the time we have got due to the postponement. He is making a programme for me—looking at specific things that we need to do to bring changes in my technique. I have also tried to do a different physical programme—undertook 2-3 sessions of cross fitness—and that has helped me too."