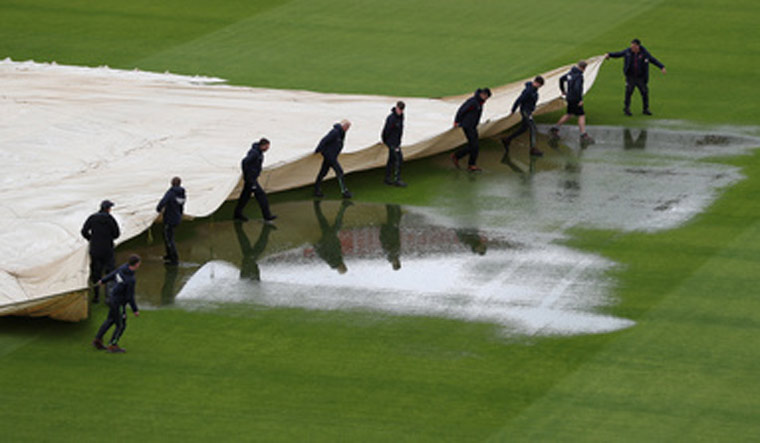 Rain has proved to the saviour for the West Indies so far on day 4 of the third Test against England at Old Trafford, with the morning session washed out because of the showers.

The Windies ended day 3 on 10/2, still 389 runs behind an unlikely victory target. The two teams went into lunch today without a ball being bowled. The three-match series is level at 1-1.

Wickets in successive overs by a rampant Broad in the final 30 minutes of the game on day 3 yesterday, put England in the driver's seat. The pacer is just a wicket shy of 500 Test scalps.

It was Broad who took all four remaining West Indian wickets in the first innings, in 22 balls, to skittle the tourists for 197.

A combined 6/22 for the day moved Broad to 499 wickets in his enduring Test career.

The weather looks like the only thing that can save the West Indies, which is starting to look tired after three Tests in three weeks and only one change of personnel in the line-up across that period.

In between the West Indies' innings, England piled up 226/2 in 58 overs before declaring, following the departure of opener Rory Burns for 90. Joe Root was 68 not out off 56 balls.

There's already no doubt who the man of the match will be. Broad, who is England's second-highest wicket-taker of all time in Tests, was dropped for the first match of the series won by the West Indies in Southampton and didn't take it well, expressing his disappointment in a TV interview during the match.

Restored for the second Test in Manchester, Broad took three wickets in each innings in a win for England. In the third Test, he has made his best score with the bat since 2013—a 45-ball 62—and took his 18th five-wicket haul in Tests in the first innings.