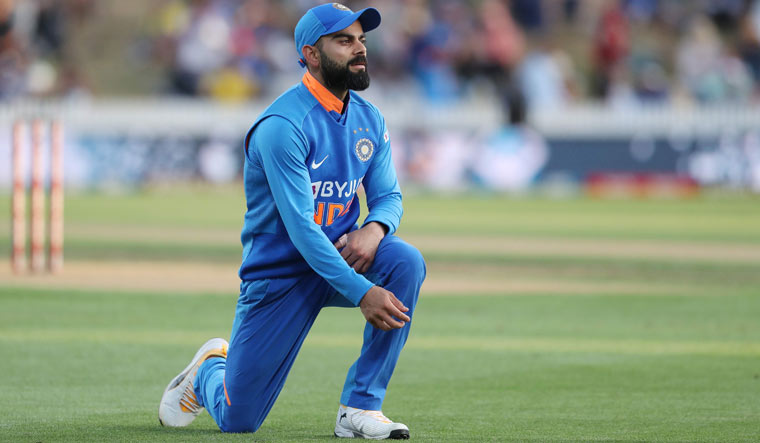 The lesson of "forward press against fast bowlers" from Sachin Tendulkar and a tip from head coach Ravi Shastri to stand outside the crease led to his transformation as a prolific Test batsman after a disastrous England tour in 2014, feels India captain Virat Kohli.

Kohli had a nightmare of an England tour where he failed in 10 successive innings but came back later in the year against Australia scoring four tons in four games, including two in Adelaide.

In a chat with Mayank Agarwal for 'bcci.tv', the Indian skipper decoded his technical changes post that England tour.

"I came back from England and spoke to Sachin Paaji and had a few sessions with him in Mumbai. I told him that I am working on my hip position. He made me realise the importance of big stride, a forward press against fast bowlers," Kohli explained.

"The moment I started doing that with my hip alignment, things started falling in place nicely and then the Australia tour happened," said Kohli.

He explained what went wrong in England and how he realised it.

"My hip position was an issue during that England tour. It was basically not adjusting to the conditions and doing what I wanted to do. So, being rigid doesn't take you anywhere. It was a long and painful realisation but I realised it," he said.

"One thing stood out—right hip opens or closes too much, you are in trouble. Keep that hip position nice and side-on and balanced so that you can play through both off side and leg side with equal control," he said.

Anderson was taking him out mainly with outgoing deliveries.

"I was too worried thinking about the ball that might come in. I was opening up a bit too early so the ball that was going away I was getting out to it every time. I just couldn't get past that confusion," he admitted.

However, with the tweak in technique also came a tweak in his stance, which was suggested by Shastri (team director in 2014-15) just before the start of 2014-15 Australia tour and the rest is history.

"He (Shastri) told me one thing, to stand outside the crease. He explained the mindset behind it. 'You should be in control of the space you are playing in and not giving opportunities to the bowler to get you out'."

Shastri also explained the logic that by standing outside the crease, so many dismissals get taken out.

"So, I started practising that same year and the results were unbelievable."

"I made my stance bigger after a conversation with Duncan Fletcher, who has an amazing understanding of the game. He only asked one question, 'Will I be able to play the short ball with a forward press and that base (widened stance)'. I said I can."

There was another interesting little chat with Shastri which was an example of Kohli's determination.

"Ravi bhai asked me whether I was scared of the short ball," Kohli laughed.

"I said I am not scared and I don't mind getting hurt but I don't want to get out," the India skipper added.