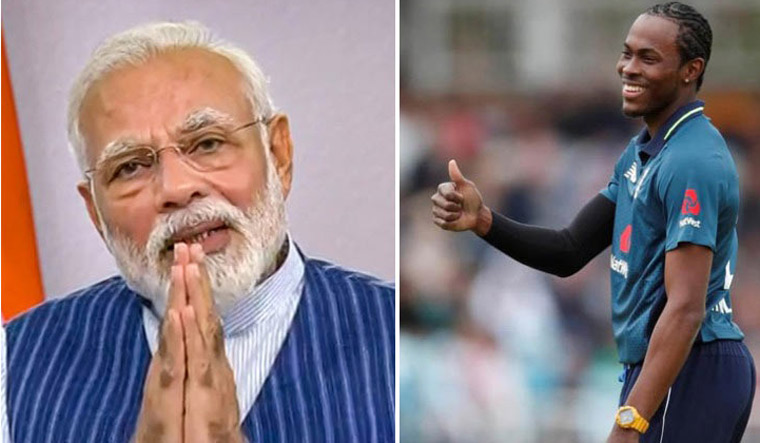 Jofra Archer has done it again! Or so, say the Twitterati. The England bowler, whose 'ability to predict the future' is legendary now, once again seems to have done the same again.

Soon after Prime Minister Narendra Modi addressed the nation today and urged the Indians to turn off lights and flash candles, torches at 9pm for nine minutes on April 5, in yet another symbolic show of unity in the wake of the COVID-19 pandemic, Twitterati dug up Archer's old tweets that seem to foretell the event.

Five of his tweets have been linked to the April 5 event. In one of the tweets, Archer said “Tell her I be looking for her with a flash light”. “9 from 9”, “Light it up”, “Lights out” and “Shudda turn off the light”, go his other tweets.

In fact, a week ago, when PM Modi announced the 21-day lockdown in the country in a bid to stop the spread of the novel coronavirus, Archer had an old tweet for that too! “3 weeks at home isn’t enough,” he had tweeted with a ‘rolling eyes’ emoji in 2017. Several fans have taken this to mean that Archer “knew” about the lockdown. The tweet from over two years ago soon went viral.

Archer even had tweets for England's semifinal win over Australia in the 50-over ICC World Cup last year, and also the nerve-wracking final against New Zealand, which England controversially won on boundary count after the Super Over was tied.

Six years before the infamous Super Over result, Archer had tweeted its “result”. He had said “16 from 6”. During the final, after both England and New Zealand were tied at 241, the Super Over came into play. England made 15 runs in the over. But the Super Over went into a tie after New Zealand also scored 15 runs. Another tweet from 2013 went, “15 from the last”. People were spooked by how accurate his tweets from long ago were.

Archer live-tweets during some matches, and it is these tweets that are later dug up by Twitterati and which seem to be foretelling a particular incident in the future. Archer himself has downplayed them as mere coincidence but the Twitterati cannot seem to have enough of his 'predictions'.