On day two, the hosts managed 178 runs in 79.1 overs for the loss of three wickets 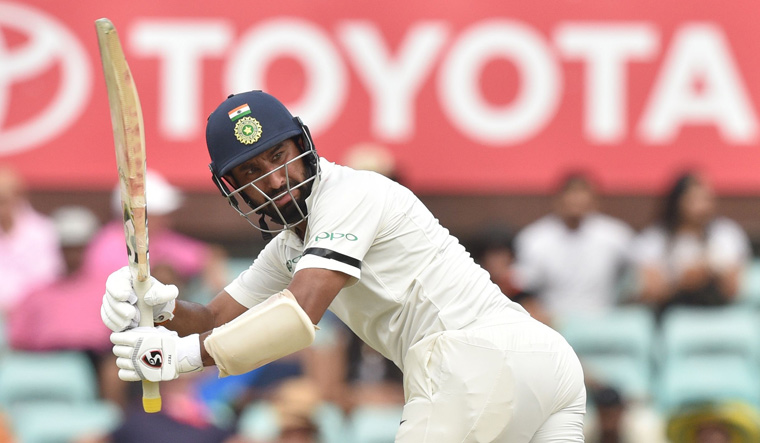 Cheteshwar Pujara and Arpit Vasavada gave a masterclass in defensive batting with a five-hour partnership on day two, taking Saurashtra to a strong position in their Ranji Trophy final against Bengal in Rajkot on Tuesday.

Their 142-run stand off 380 balls wore down the opposition who had a slight edge after reducing Saurashtra to 206 for five on the opening day.

Speedster Mukesh Kumar removed Pujara and Prerak Mankad (0) in the final session but by then the damage had already been done. Bengal took their first wicket of the day in the fifth over after tea with Wriddhiman Saha effecting a sharp stumping off Shahbaz Ahmed to send back Vasavada.

Bengal coach Arun Lal had rated the pitch as "very poor" on Monday with the odd ball keeping low but their pace attack could not make much use of the conditions after Akash Deep struck thrice on day one.

Run-scoring indeed was difficult but Pujara and Vasavada's plans were crystal clear: tire the bowlers out and pounce on the loose balls. Their stay in the middle may not have been pleasing to the eye but proved to be effective.

While it was a typical Pujara knock, full of patience, Vasavada, who is coached by the India batsman's father Arvind Pujara, made a bigger contribution to the team's cause with a back-to-back hundred and fourth of the season.

Vasavada, who had made a match-winning knock against Gujarat in the semifinal, played with remarkable patience and composure. His innings comprised 11 fours. This was Vasavada's eighth first-class hundred.

It was a commendable effort from Pujara too, considering that he had not been keeping well since his return from New Zealand last week.

Such was the slow pace of the Pujara-Vasavada stand that the first boundary of the bat came in the 15th over of the day when Vasavada pulled Akash Deep.

Bengal, who had bowled 80.5 overs on day one, took the new ball after the 85th over but it did not lead to a breakthrough.

Vasavada brought his fifty with a four off off-spinner Arnab Nandi, driving him past mid-on. Pujara broke the shackles in the following over by stepping out to cover-drive left-arm spinner Ahmed. Soon after, the Test specialist survived an lbw appeal after Bengal went for the limited DRS.

The closest Bengal came to getting a wicket in the afternoon session was when Vasavada straight-drove Mukesh, who claimed the ball kissed his hand before hitting the stumps with Pujara at the non-striker's end. However, the appeal was turned down as there was no conclusive evidence.

The left-handed Vasavada reached three figures 20 minutes before the tea break as he cut one off Nandi through cover, leading to an intense celebration. The entire dressing room applauded his valuable effort for which he also got a hug from Pujara.

Pujara, who collected five boundaries, got his half-century off 191 balls at the stroke of tea. In the morning and afternoon session combined, Saurashtra scored 133 runs in 58.1 overs. Pujara's best shot of the day came when he caressed one off Akash Deep between cover and point.