WATCH: Stump-mic cable saves Lanning from being run out in final against India

The incident happened in the 14th over of the Australian innings 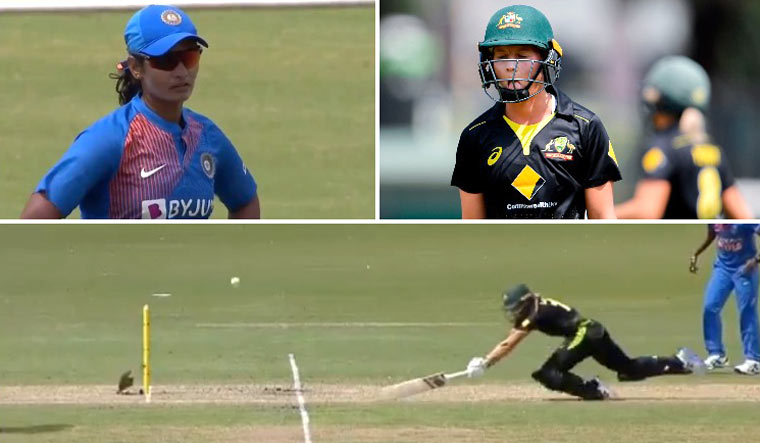 Technology in cricket has had its share of brickbats and bouquets. On Wednesday, in the tri-nation women's T20I series final, India were at the receiving end of the 'hazards' of technology.

The incident happened in the 14th over of the Australian innings. Their skipper, Meg Lanning, was batting on 18, when she hit the ball towards mid-off and set off for a run. Shikha Pandey collected the ball and threw at the stumps. The ball looked to be headed straight at the base of the stumps, with Lanning nowhere in the picture.

What happened next was nothing but bizarre. The ball hit the TV box cover at the base of the stumps for the microphone and bounced away from the line of the stumps. An alert Lanning stole a second run amid the drama—a fact that did not go down well with commentators Brad Hodge and Elyse Villani, who called it a “cheeky run” and said it was against the “spirit of cricket”.

Here's the video of the incident shared by Cricket Australia on Twitter.

Another example of technology saving the batter!

Lanning was dismissed in the next over for 26. Opting to bat, Australia managed to post 155 for six in their stipulated 20 overs, with Beth Mooney top-scoring with a 54-ball 71. Despite India opener Smriti Mandhana's 37-ball 66, Australia skittled out India for 144, and claimed the series.

Seasoned left-arm spinner Jess Jonassen was the star of the show with brilliant figures of 5 for 12 in four overs, making her only the third Australian bowler to return a five-for in the women's T20 format.