Rock paper scissors instead of super over? ICC had this to say to Rahul-Neesham banter

Rahul and Neesham had a brief exchange of words during match 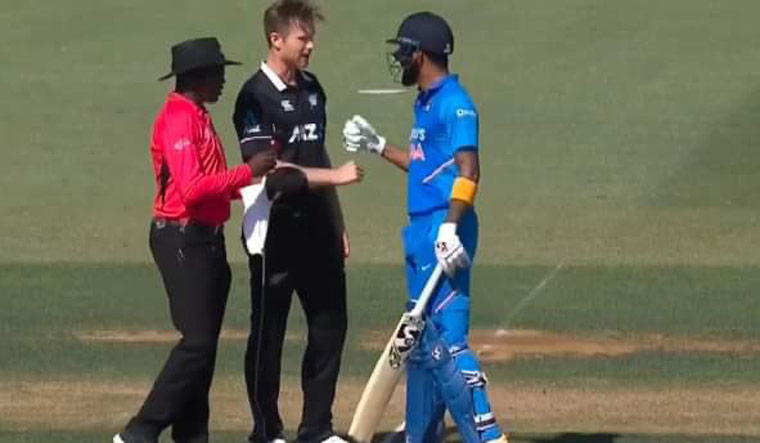 An underwhelming India faced their first ODI series whitewash in more than three decades as New Zealand completed a 3-0 sweep with a five-wicket victory in the third match here on Tuesday.

India suffered defeat despite the bravado of K.L. Rahul who piled up a ton off 104 balls. While on crease, Rahul had shared a few words with New Zealand's Jimmy Neesham. Rahul had knocked Neesham during a quick single in the 20th over as Neesham was on his way. This led to some banter between the two.

Rahul and Neesham will be playing for Kings XI Punjab (KXIP) in the Indian Premier League (IPL) 2020.

After the match, Neesham clarified that there was just some banter between the two and nobody crossed the line.

Later, Neesham took to Twitter to troll Rahul with a still of the incident. “Paper, scissors, rock?" he captioned the picture.

Rahul was quick to respond. "Let’s settle this in April. See u in a bit," hereplied. The IPL 2020 is expected to take place in April.

Wading into this friendly exchange of words was the ICC. “Perhaps we do this instead of super overs?,” sharing the tweet, the cricketing body asked on its official handle.

Perhaps we do this instead of super overs? 🤷‍♂️ https://t.co/yoMn9ZKuR2