It all started with Dada's team: Kohli on India's Test success 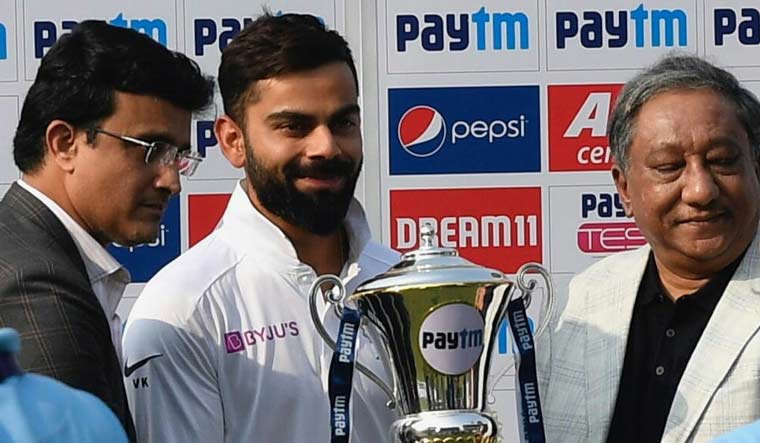 Emerging triumphant in the mental battles that Test cricket throws began in the era of Sourav Ganguly and the current Indian side has taken it forward with sheer hard work and self belief, skipper Virat Kohli said on Sunday.

India completed a dominating 2-0 series win against Bangladesh after recording an innings and 46 runs victory over the visitors in their maiden pink ball Test.

The hosts had won the first Test by an innings and 130 runs in Indore.

With the win, India cruised to their 12th consecutive Test series victory at home and also consolidating their position at the top of the World Test Championship table.

"Test cricket is a mental battle. We've learnt to stand up. It all started from Dada's (Sourav Ganguly) team. The belief is key and to be honest we've worked hard, and reaping the rewards of it," Kohli said at the presentation ceremony, when asked about his side's dominating run in the longest format.

India's fast bowling unit has been in tremendous form. In the absence of the injured Jasprit Bumrah, the pace trio of Ishant Sharma, Mohammed Shami and Umesh Yadav grabbed all Bangladesh wickets on offer in the second Test.

Skipper Kohli said the success of the pace unit at home, which has traditionally been a breeding ground for spinners, is because now the speedsters are armed with the belief that they can do well in any condition.

Kohli also applauded the fans for packed house on all three days of the match.

"Amazing, the numbers have only gotten better. We didn't think so many people will turn up today as we know the game will end earlier. This crowd sets the right kind of example. To reiterate the point of Test centres, this is a great example."

Man of the series Ishant, who ended with 12 wickets in the two Tests, said he faced difficulties with the pink ball initially. The 31-year-old ended with the figures of 5/22 and 4/56 in the day/night Test.

"Pitching the ball up is something we developed during the last game. Me and bowling coach discussed it. It wasn't a fluke. Pink ball is a little difficult, it didn't swing at the start and we need to adjust to the conditions."

Meanwhile, visiting captain Mominul Haque said his team will look to learn from their mistakes.

"Definitely, the gap between the two teams is concerning. We've to learn from these two matches and follow up what happened. The pink ball, new balls are challenging and we couldn't take the challenge with the new ball.

"If we lose no problem, but there was some positives. Ebadat bowled well. Riyad bhai and Mushfiqur bhai batted well."