Kerala Blasters were denied two clear penalties in either halves 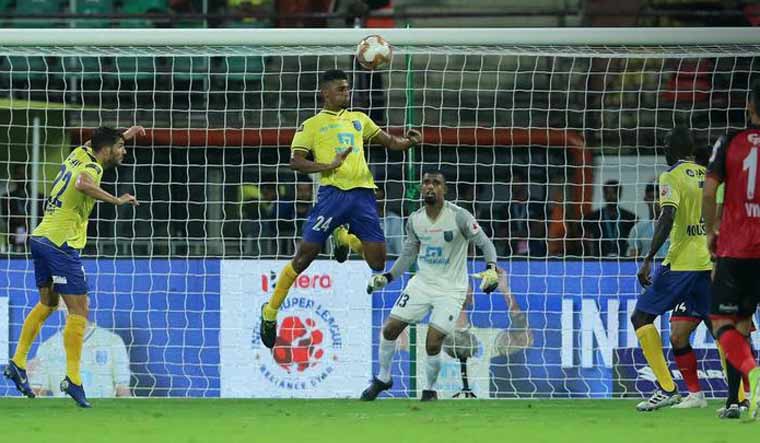 Players of Kerala Blasters (yellow jersey) and Odisha FC in action during their ISL 2019-20 match, in Kochi | isl.com

Kerala Blasters were left ruing their bad luck and injuries after their spirited effort went in vain as they were held to a goalless draw in an Indian Super League encounter, at the Jawaharlal Nehru Stadium in Kochi.

The Blasters were denied two clear penalties by the referee in either halves, after their skipper Jairo Rodrigues and forward Raphael Messi Bouli had to leave the field within the first 25 minutes of the match because of injuries.

Despite the setbacks, Kerala dominated the first half with midfielders K.P. Rahul and Sahal Abdul Samad keeping the Odisha defenders on their toes with their speed and skills.

Kerala Blasters had the chance of the match in the 35th minute when a wonderful solo run by Samad resulted in him being fouled inside the box by Odisha's Narayan Das. But, much to the shock of Blasters players, coach Eelco Schattorie and fans, the referee waved play on.

The second half saw Odisha FC trying to come up with some attacking play. Their first real chance came in the 58th minute, when Jerry gave a beautiful cross to Nandhakumar Sekar, who hit the side netting from a narrow angle with Kerala Blasters keeper T.P. Rehenesh out of position.

Prasanth was lively on the right flank with his incisive runs but his crosses often failed to find his teammates inside the box. In fact, it was during one of his runs that a ball was deflected on to Das's arm inside the box but the referee yet again failed to notice it. Protests from the Kerala players fell on deaf ears.

Rehenesh had a scare in the 75th minute when a high cross from Das went just over the bar.

Ogbeche was finally brought on in the 78th minute, and almost provided the winning assist in the 86th minute when his flicked header found Rahul inside the box at the far post. His stinging shot was, however, parried away for a corner by an alert Odisha keeper Francisco Dorronsoro.

Kerala Blasters kept on pressing for the winner but Odisha managed to keep the home side at bay and collect a valuable point.