Australia are 1-0 up in the series, having won the first Test and drawn the second 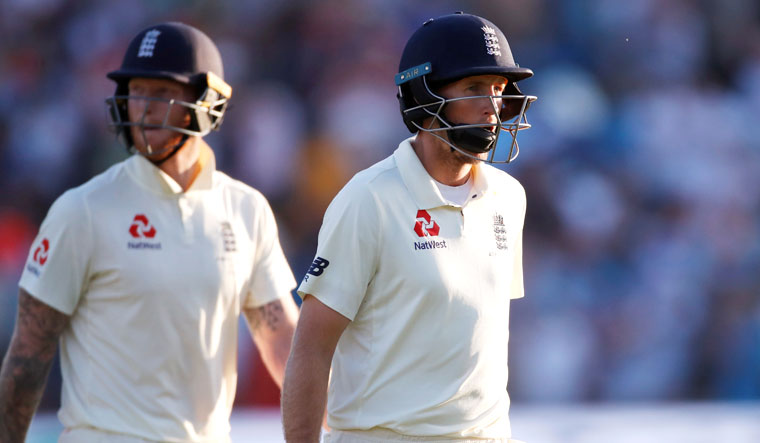 England's Joe Root and Ben Stokes walk back to the dressing room after the third day's play in the third Ashes Test, at Headingley, Leeds | Reuters

England skipper Joe Root dug in with an unbeaten 75 to keep the Aussies at bay in the third Test of the Ashes series, at Headingley. Chasing a daunting target of 359 to win the Test and keep the series alive, the hosts reached 156/3 at the end of third day's play.

Australia are 1-0 up in the series, having won the first Test and drawn the second. They need only one win to retain the Ashes urn.

If England manage to chase the total, it would be the second-highest ever run chase at Headingley, Leeds. The hosts were in early trouble, losing two quick wickets with just 15 runs on board. Openers Rory Burns and Jason Roy both fell cheaply shortly after lunch. Left-hander Burns (7) edged a lifting Pat Cummins delivery to David Warner at first slip before Roy, yet to convince as a Test match opener, played down the wrong line to Josh Hazlewood, who took 5/30 in the first innings, and was bowled.

It looked like another dramatic collapse was on the cards following the hosts' woeful 67—their lowest Ashes total since 1948—in the first innings.

However, Root managed to avoid a third successive duck in the series, and instead, put on a vital 126-run partnership for the third wicket with Joe Denly (50).

Ben Stokes (2*) was giving the skipper company at stumps, with England needing 203 more runs to win.