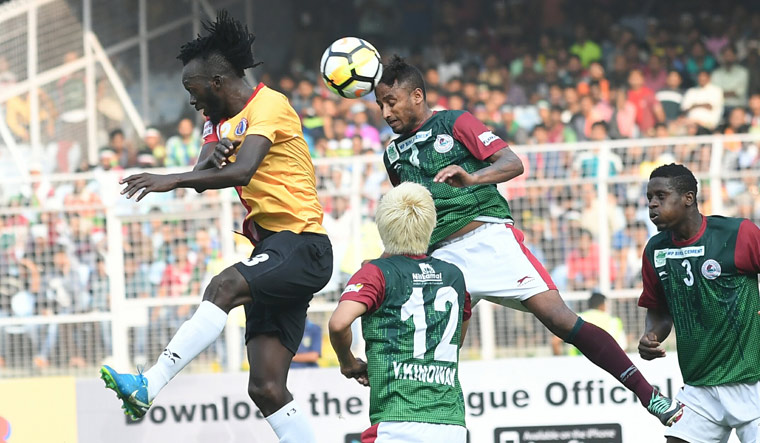 Nearing a century of existence, East Bengal have pleaded with the All India Football Federation to consider their legacy and contributions before acting for pulling out of the Super Cup.

Having skipped the Super Cup last month owing to "unfair treatment" by the federation, the I-League clubs have denied being at fault during the two-day AIFF disciplinary committee hearing that concluded in New Delhi on Sunday.

The 1889-born Mohun Bagan and East Bengal (started in 1920) are the two oldest football clubs in India.

"Nonetheless we committed a mistake and other clubs also committed mistake. As national body of the game the AIFF is like our parents and just like parents treat their children, the AIFF should not take action against the clubs in this case.

"We are a legacy club of 100 years existence and we have made our contribution to Indian football. So in the interest of Indian football the AIFF must not take action against the clubs and end the issue here at this point," he added.

As many as seven I-League clubs withdrew from the Super Cup demanding a meeting with AIFF President Praful Patel regarding the future roadmap of Indian football.

After initially agreeing to address the aggrieved clubs' concerns, Patel said there was no point in meeting as the teams had pulled out by then.

Minerva Punjab FC argued that the AIFF chief responded to their request late.

"I-League clubs were ready to play Super Cup had Mr. Praful Patel granted us a meeting before the commencement of the competition as requested in letter dated 12th March by the clubs," Minerva Punjab said in a statement.

"It was only after withdrawal of Gokulam Kerala, Minerva Punjab and Aizawl FC in the qualification round that Mr. Patel responded to our request for a meeting. Still no date was given.

"After Mr. Patel agreed to meet the clubs with tentative dates on 21st March, all clubs were willing to participate in the Super Cup. Our only request was to reschedule the qualifiers and allow even the three teams who had not played in the qualifiers (because of which the meeting was granted) to participate.

"Unfortunately the federation denied the request for rescheduling of the qualifiers. Clubs who have pre qualified for the Super Cup could not ignore the sacrifice of clubs drafted in qualifiers (because of whom the meeting was granted). Hence could not participate in the Super Cup."

Minerva Punjab are at loggerheads with the AIFF for long now over various issues.

"Clubs are not maligning the federation, but are seeking our basic rights to be heard and treated fairly as important stakeholders of Indian football.

"The federation is irked every time we stand up for our rights. They expect us to wait patiently in the dark for our doom. Unfortunately we cannot stay silent as future of hundreds of players and staff linked with each club hangs in the balance," Minerva Punjab added.